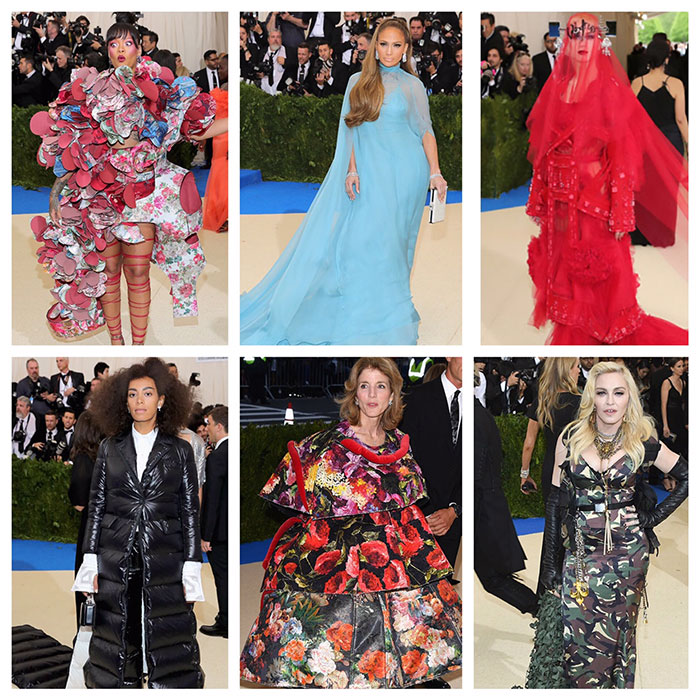 Before we go any further, let us remember that the Costume Institute Gala at the Metropolitan Museum of Art is not your average red carpet event.

In my opinion, a Met Gala dress is a dress that is only appropriate for the Met Gala. You shouldn’t be able to wear it to any other black tie charity event, the Fastest & the Furiousest premiere or the Oscars! It is to be worn to the Metropolitan Museum of Art on the first Monday in May … and that’s it.

This is the Hunger Games of fashion and we’re in the Capitol, baby. Effie Trinket is your stylist & your muse. Go ahead and be the Girl on Fire. If not, you’ll suffer a fate worse than death, being called boring.

With that being said, here our some MAYJAH lewks that I’m totally going to make light of …whether I liked them or not! ?

1.Katy Perry went Gaga, but for once she actually got it right. First I can’t get her new song “Bon Appetit” out of my head and now I approve of Katheryn Hudson’s Real Housewives of Kabul couture. This is my new reality in Trump America, people! 2. Category is: Pharrell‘s wife first time in red Teletubby drags at the ball. 6. Not even a Pepsi can save Kendall Jenner from this AVN Awards chic. She’s XXXtra. 7. If the theme was 1969 Oscars, then Jennifer Lopez nailed it! But seriously loved that she covered up knowing most would be airing out their vadges up and down Fifth Ave. #WhenTheyGoLowYouGoWrapped 9. GOOP Style Tip: If you can’t find anything to wear to the Met Gala, just repurpose one of your old ’90s Oscar gowns! #GwynethPaltrow

10. Alert Ryan Murphy! There will not be a Feud: Courtney vs. Frances Bean. 13. No one cares, boo. #KimWhatsHerName 14. When your dramatic fashion moment gets derailed by a beige “red carpet” … #TrenchCoatMafia #PriyankaChopra 15. Bella Hadid, 20, is serving pussy-catsuit. Parental guidance is suggested, so luckily her mom, RHOBH‘s Yolanda Hadid, was there too. 17. Madonna is dressed for battle because of all the attacks she is sure to get in the press. #TheresOnlyOneQueenBitchesAndSheCanWearWhateverSheWants 19. Rihanna won the Met Gala … and a VIP membership to Jo-Ann Fabrics! 20. And finally …  SCREAMING INTO TRAFFIC is back next week after a three month sabbatical of silence, meditation and home drinking. We’ve got a new lewk & new surprises, but still the same old reads & shade. Season 3 is serving all the latest loud & proud pop culture noize that your weave can handle!

New episode coming next week…but until then binge & purge the first two seasons on iTunes! Come thru podcast kweens and listen, like & share!