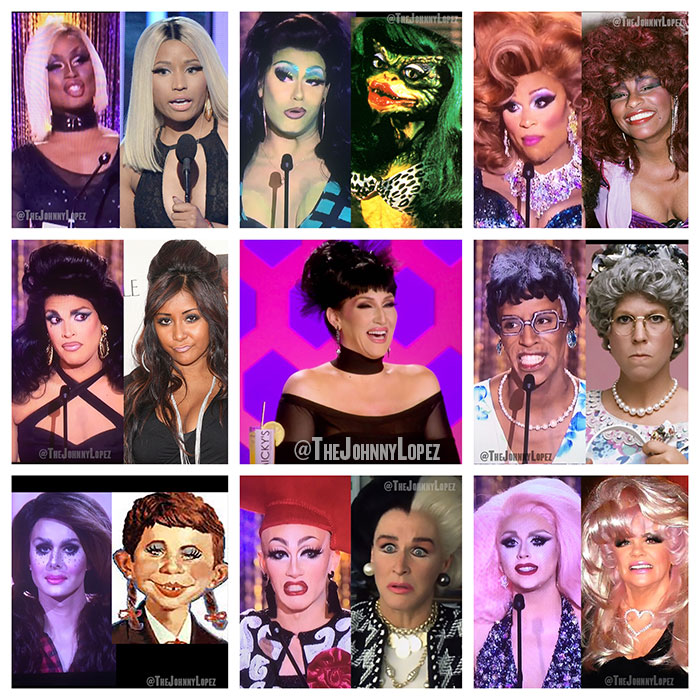 Second only to the Snatch Game, the annual reading challenge is usually the funniest segment of each season. Usually.

But with no one matching the wit and timimg of Bob the Drag Queen, Alaska or Bianca Del Rio, the season 9 kweens were less comedy and more tragedy.

While Valentina was awarded the reading challenge and Peppermint took the roast of Michelle Visage, in my book, Sasha Velour had the best overall lines.  “Valentina is a queen that combines all the excitement of smiling with the thrill of just standing there.” TRUTH! Three things I loved this week: 1. Nina Bo’Nina‘s elderly drag. “And what’s your name baby?” (to guest judge Fortune Feimster). DEAD! 2. Tamar Braxton looking gorge and serving shade.com. Shantay you stay, gur!  3. Michelle telling the kweens they should have gone balls to the walls in roasting her, because it’s a, um, ROAST! She’s “so Jersey” and you bettah not fugheddabout it!

Three things I hated this week: 1. Farrah Moan‘s alabaster face beat. Apparently, she can only throw shade …on her cheeks!  2. Alexis Michelle getting pissy about weight jokes, yet mock’s Shea’s teeth. Isn’t that the pot calling the kettle FAT?!  3. Just as I’m starting to like Trinity Taylor she crashes and burns with her unfunny hillbilly routine. Shame on me, y’all!

So after two weeks off, here is this week’s Snatch Game wannabe celeb dopplegangers. 1. Shea Culee did it on ’em! #NickiMinaj

Pound the alarm, Shea is about to snatch the whole damn thing! 2. Alexis Michelle has been acting like a Gremlin lately!

Do not body shame …or feed her after midnight!!! 3. Peppermint is every woman! #ChakaKhan

I feel for you, Peppermint! I think I love you. 4. Valentina is a SHORE thing! #Snooki 5. Nina Bo’ Nina Brown is part of your Mama’s Family!

Some say her shtick is getting old, but I think it’s still funny. 7. Sasha Velour is so Cruel-lla.

She was very, very Close this week. Sashay away – & rest in peace – knowing your face was beat for the gawds.