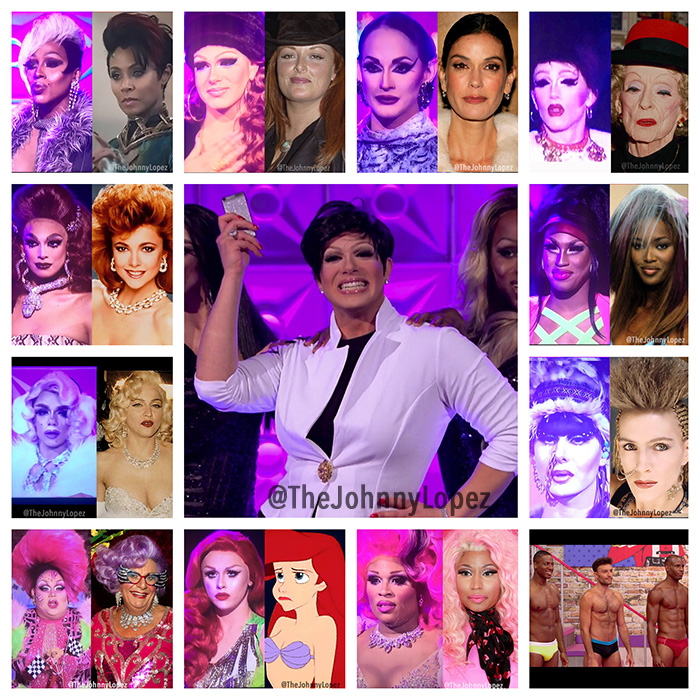 Let me just say it up front, I need Kardashian: The Musical to be a real, legit thing. For The Record or Rockwell in LA  get on it, stat!

Whether you hate the Kardashians or really hate them, I love a good origin story. And since I was at TMZ when Kim Kardashian arrived on the scene, I have a vivid memory of the first time she was covered in the press. Even before being outed as a Friend of Paris, she was the “mystery woman” on a date with newly single Nick Lachey. ‘Memba that?!

Three things I loved this week: 1. Alexis Michelle as Kris Jenner, duh! Knailed it. 2. Sasha, Trinity and Peppermint as the trilogy of terror that was Lindsay, Paris & Britney. The patron saints of Hyde Lounge and of  the long lost era of young celebrities gone wild. RIP! 3. That Valentina‘s “quick drag” mini-challenge equals beat for the gawds flawless face. #EditingSayWhat

Three things I hated this week: 1. Meghan Trainor in a onesie. No! 2. Meghan Trainor saying “Hey, gur” to this week’s winner Shea Culee. No! 3. Hearing Meghan Trainor’s song “Woman Up” during the lip sync and actually liking it. Sashay away, Johnny!

Another thing I really hated, Eureka getting sent home because of her meniscus or whatever. Farrah Moan & Cynthia Lee Fontaine were saved from what should have been a double elim. Shante you stay, but by the skin of your cucus, henny. This Broadway kween is a little bit country. 3. Cynthia Lee Fontaine is getting Desperate.

She should know by now, never take off your clothes and/or wig during the lip sync. There may be a Feud if she doesn’t win. 5. Valentina is starting her own Dynasty. 6. Put your phones down, because Shea Culee is owning the runway. 7. Aja has a lot of Blond Ambition.

But like Madonna at the ’91 Oscars, she ain’t gonna snatch any trophies. I Don’t Wanna Fall in Love with Trinity, but I do love an obscure Jane Child reference. Put that super bass in your walk. Under the sea she goes. The bright side is she’s already a legendary comedy kween!

Now get all the tea in this week’s UNTUCKED below: