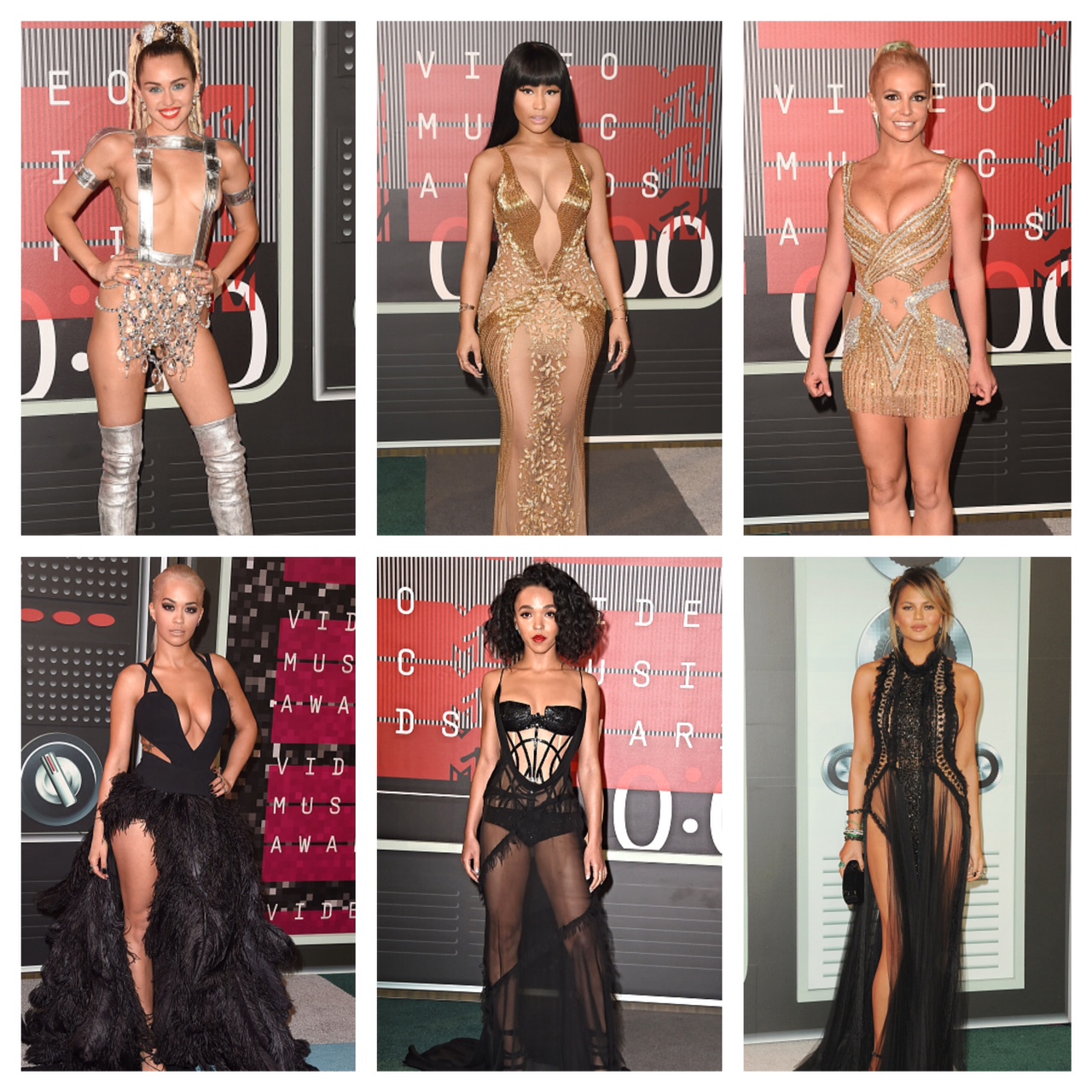 Here are 15 Things learned from barely watching the 2015 MTV VMAs. 2. Which hopefully means we are nearing the end of the reign of Kim Kardashian’s drag queen posse. 3. In keeping with the RuPaul theme, Nicki Minaj and Taylor Swift did their best to lip synch for their lives!

4. For some unknown reason, the night’s red carpet was sponsored by Showgirls. How else to explain why so many paid homage to Nomi Malone? #Goddess 5. Eight years after imploding live on the VMA stage, Britney Spears returned looking lucid, animated and able to woodenly read a teleprompter again. Sadly, there weren’t enough meds – or conservators – in the world to remove that God-awful navel piercing. #LeaveBritneysBellyAlone 6. Contractually bound for life, forced to appear in mind-numbing propaganda videos and sworn allegiance to an egomaniacal leader, Taylor Swift’s “Bad Blood” squad is like Scientology repurposed for leggy millennial supermodels & assorted B-list actresses. Tay’s next concert stop is sure to feature a duet with Xenu. 7. The Weeknd has some serious love for the Jacksons. His oversized jacket and unruly weave was giving us straight up “Control”-era Janet, while the pyrotechnics were a 911-call away from igniting him ala Michael‘s doomed Pepsi commercial. I can’t feel my face … because it’s melting!

8. Justin Bieber proved he’s just like every other drunk girl on a Saturday night. He first went to DryBar, then danced & cried. Now all he needs is the morning-after pill. 9. Kylie Jenner is transitioning too … into Nicki Minaj! 11. Scary realization #2: At 43, Jared Leto could potentially be the biological father of most of the night’s performers and nominees.  Breed me, Jordan Catalano!

12. Scary realization #3: With so many of these new pop babies & YouTube toddlers running amok on stage, I’m actually relieved when I see a Kardashian, if for no other reason than that they’re recognizable.

13. He looked like he was dressed for The Reaping, so screw the presidency, I nominate Kanye West as Tribute. #BipartisanSupport 14. Thanks to Demi Lovato, Iggy Azalea’s face is no longer the only thing getting work.

15. In retrospect, it’s amazing how normal Miley turned out.