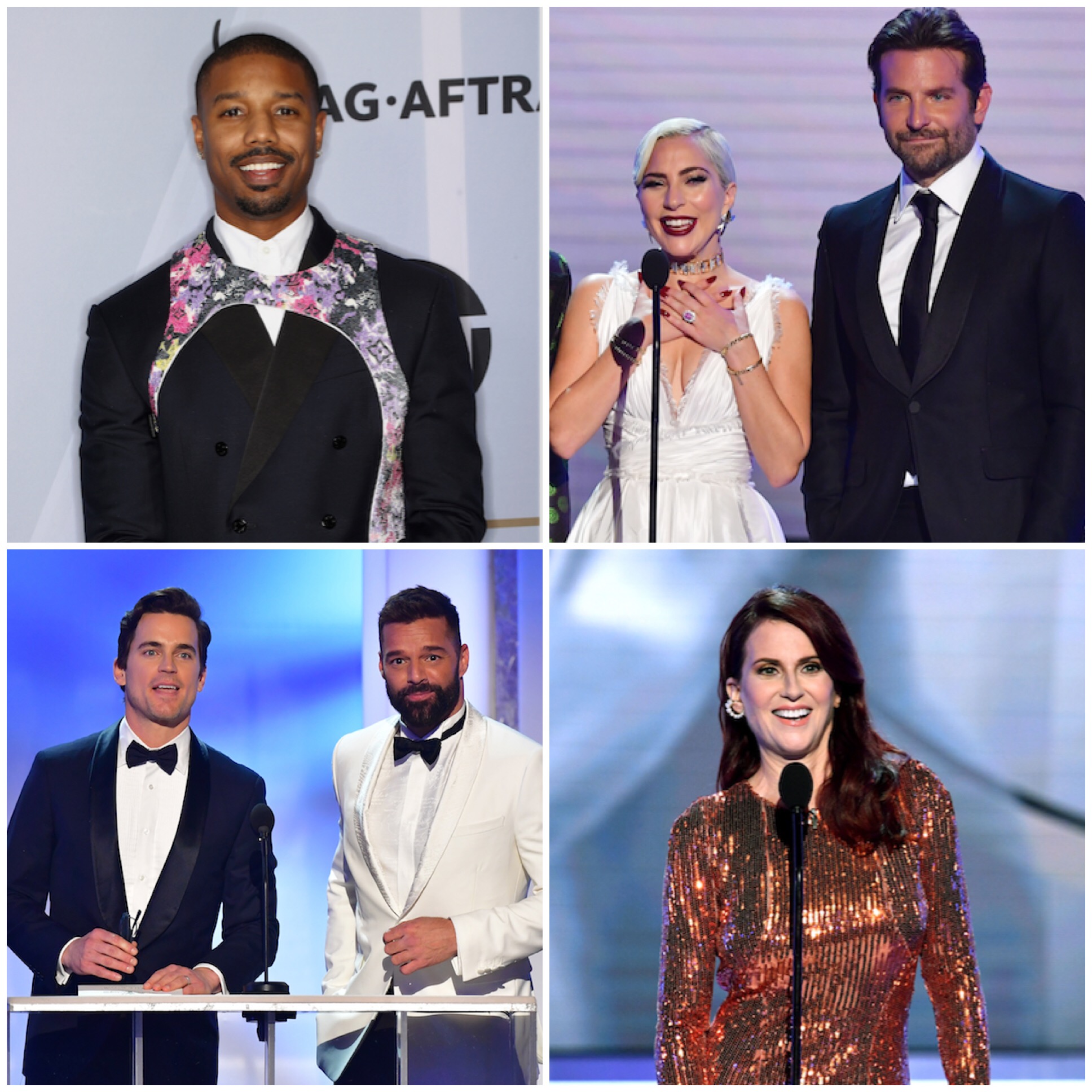 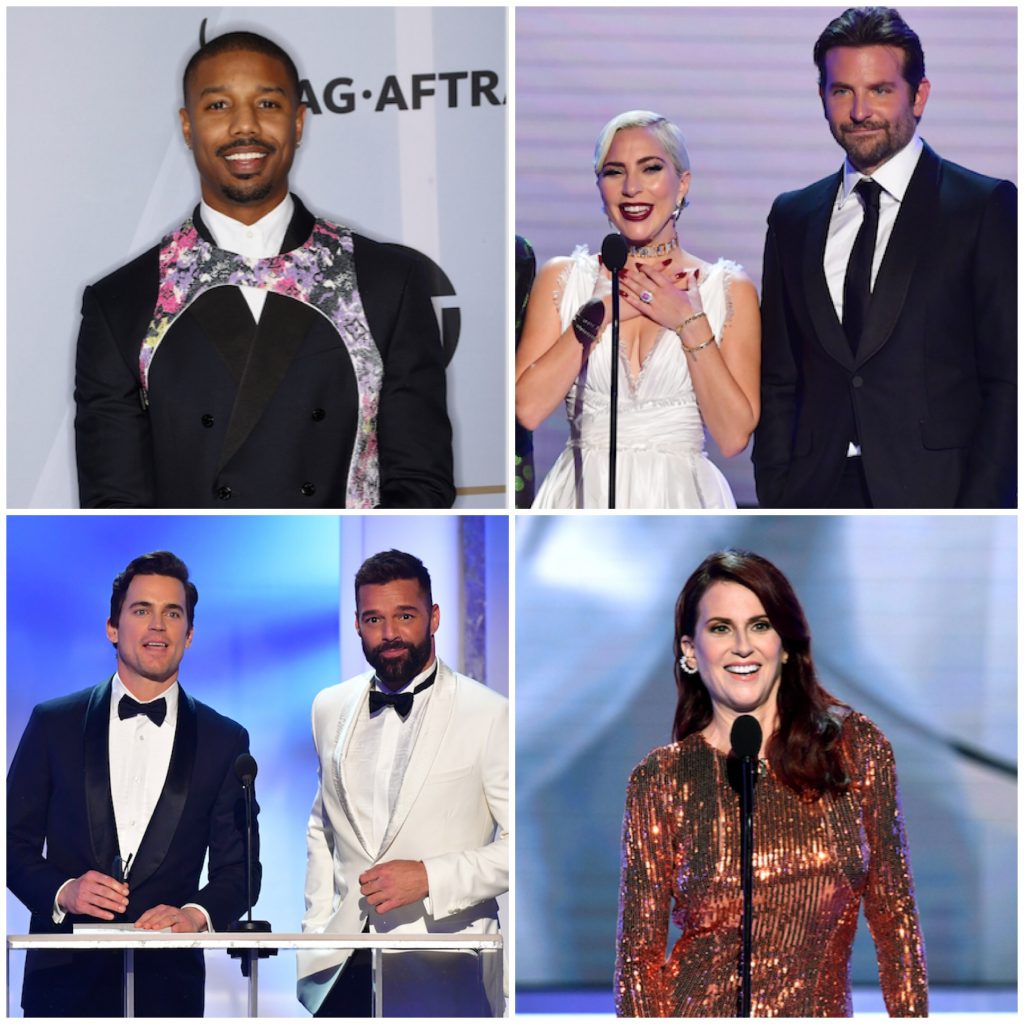 They may be on an off-brand network, but the SAG Awards are doing something right. The show is a lean two hours with 15 categories, no overwrought numbers and presided over by a lowkey host.

With no homophobic tweet history to be found, Megan Mullally made it look easy, breezy and fun. She had some zingers, did a quick skit here and there, and mostly just let the show drive itself. No big whoop. So what? Who cares? And everyone goes home happy in time to watch Rent (not-so)Live on their DVR.

So whether you saw the SAGs or not, here are 15 moments that caught my eye. 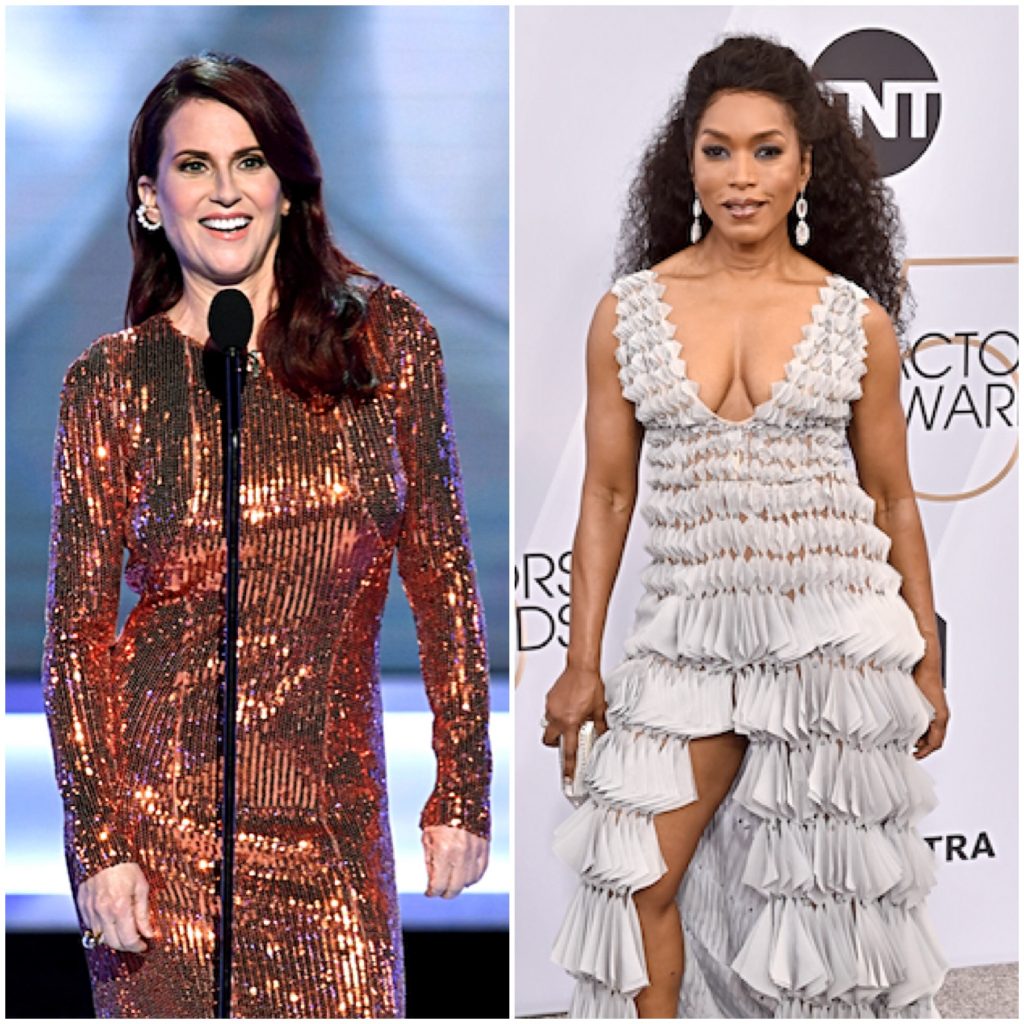 1. Megan Mullally & Angela Bassett – This is 60. Icons & Legends only, the rest of us are all screwed. 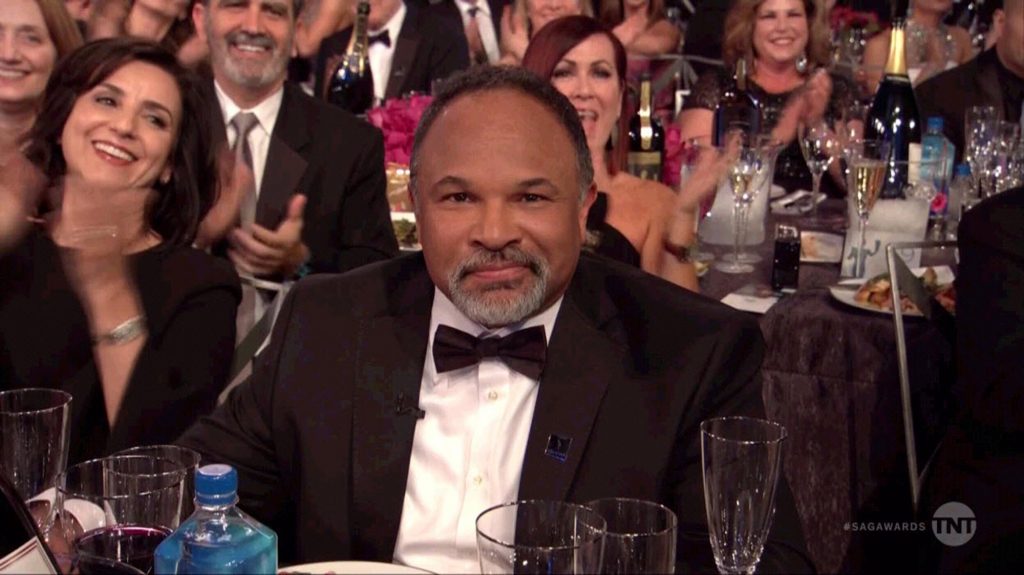 2. Geoffrey Owens – Since the former Cosby Show star went from unemployed actor to front & center at the SAGs with multiple TV gigs just five months after being job shamed for working at Trader Joe’s, I’m expecting a big return from the universe for all those years of being shamed for buying 2 Buck Chuck. Seriously, hire me! 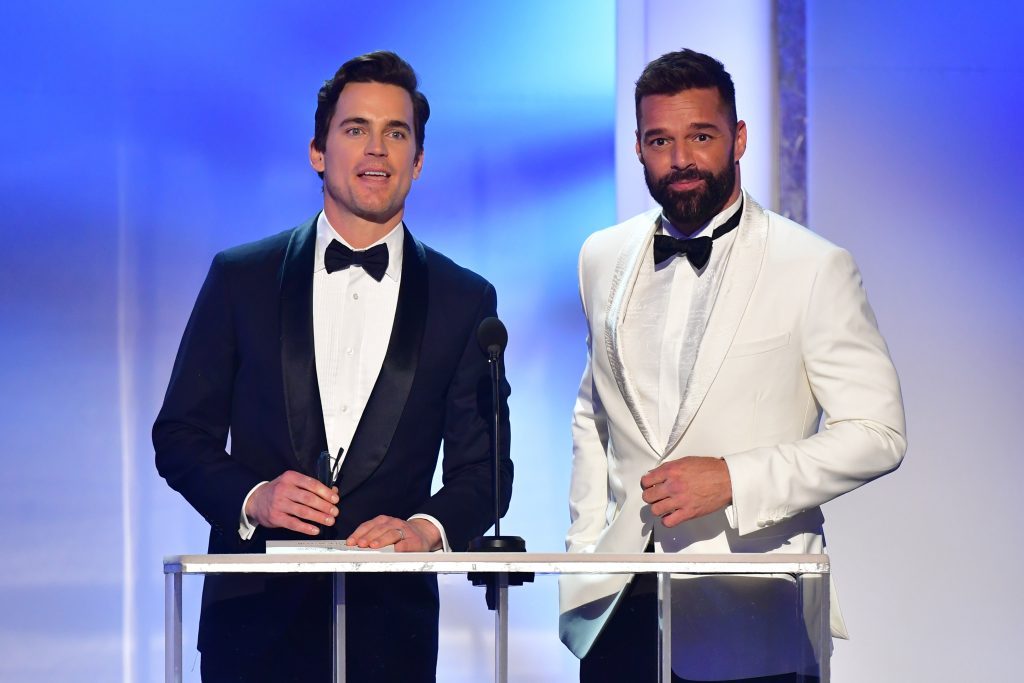 3. Matt Bomer & Ricky Martin – This made all the EPT results positive, melted all the Zara skinny jeans from Weho to Hells Kitchen and forced Mother to send Mike Pence immediately into a sensory deprivation chamber for the remainder of the Dump presidency. #TheRapture 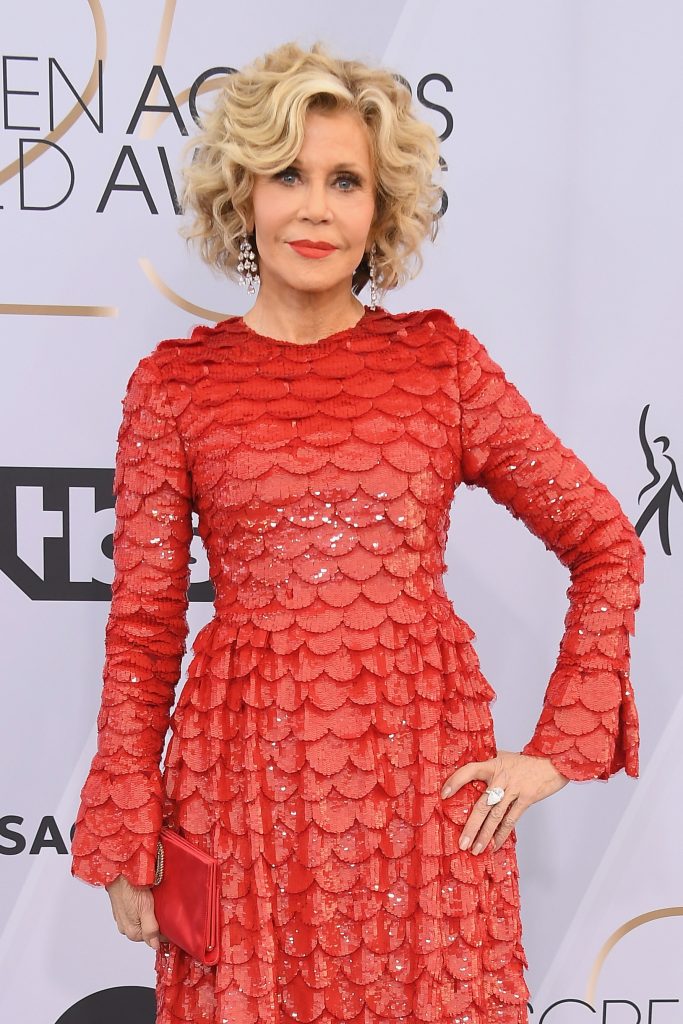 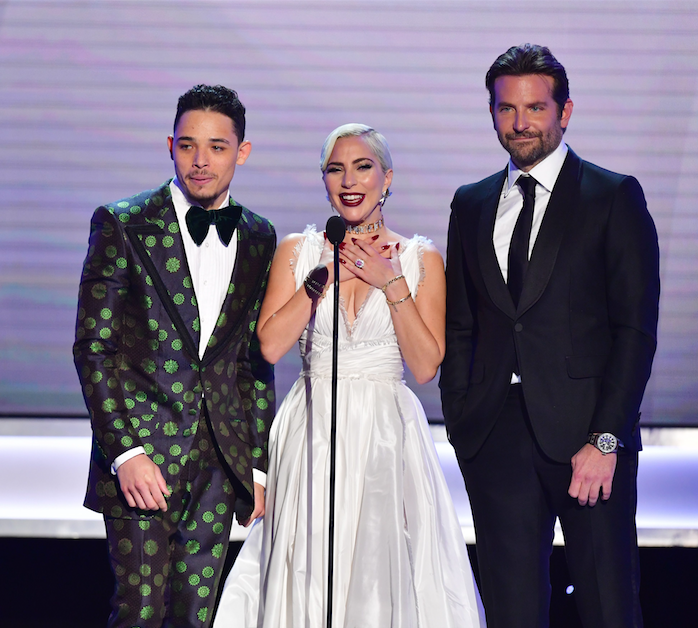 5. Lady Gaga & Bradley Cooper – (Today, the part of Halsey will be played by Anthony Ramos.) I have A Star Is Born PTSD, because anytime I see Stefani & Brad standing on a stage together I can’t help but stare at his pants expecting it to happen again? Don’t do it, Jackson Maine! 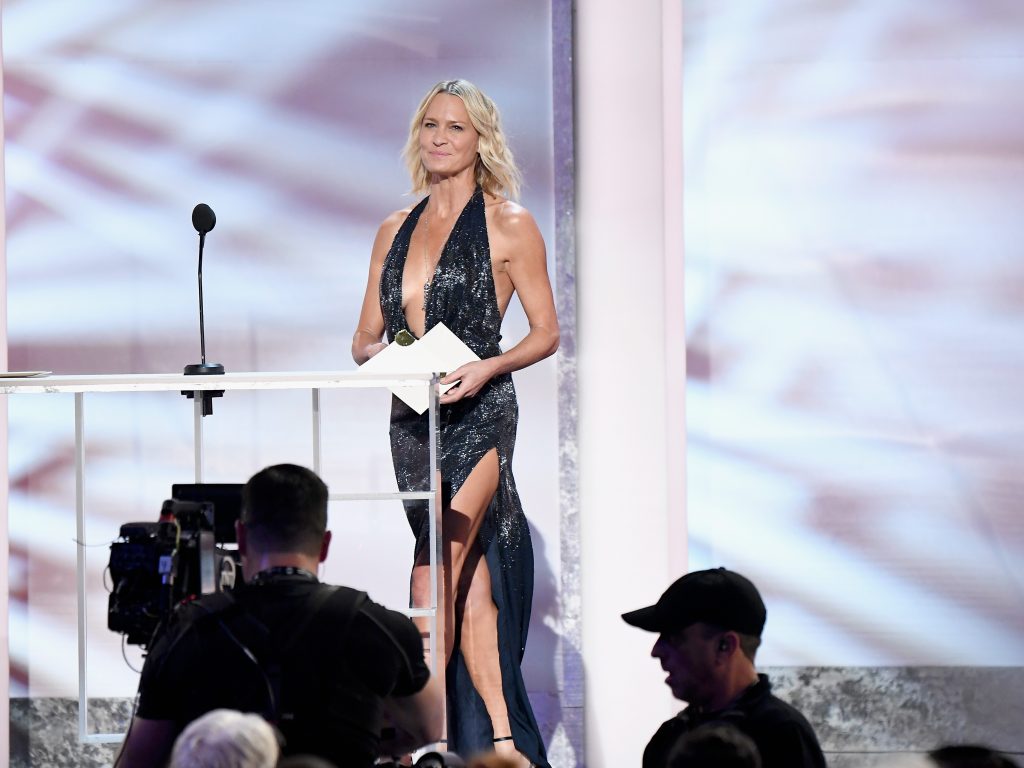 Robin Wright – Category is: Michelle Pfeiffer in Scarface goes to an award show and steals all the husbands realness. Based on this photo, Netflix has greenlit a House of Cards prequel where Claire Underwood time travels to the ’70s and for three seasons just dances and does coke at Studio 54. I’m so in! 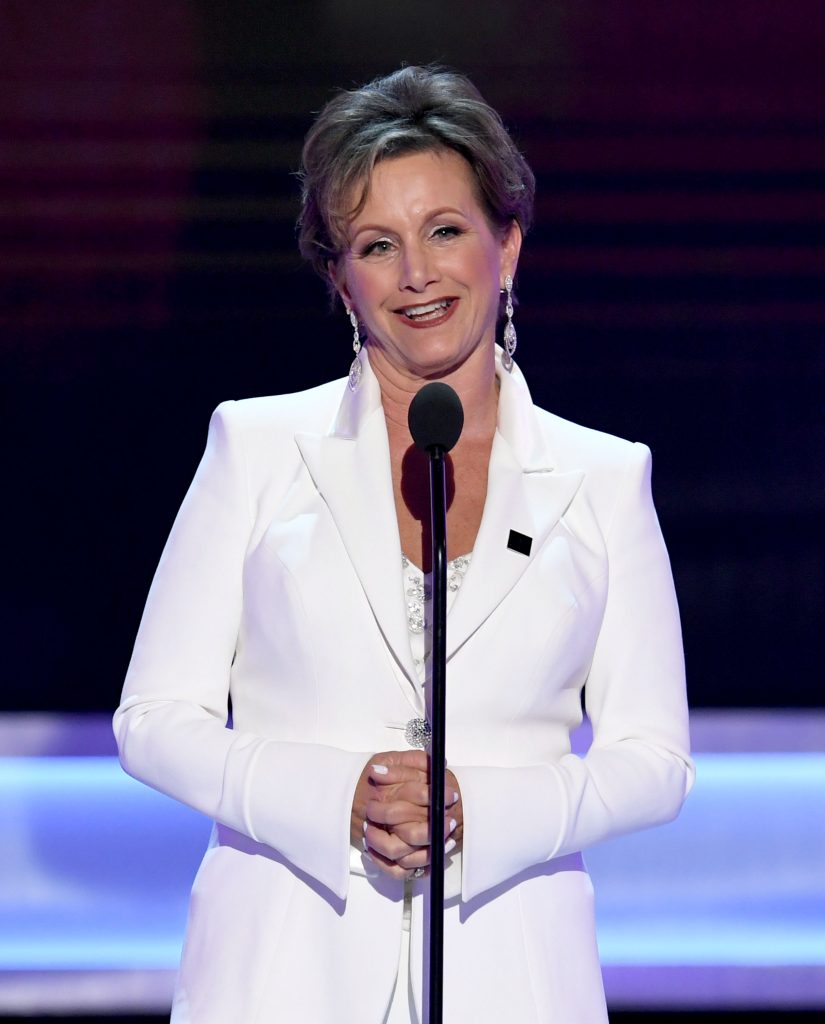 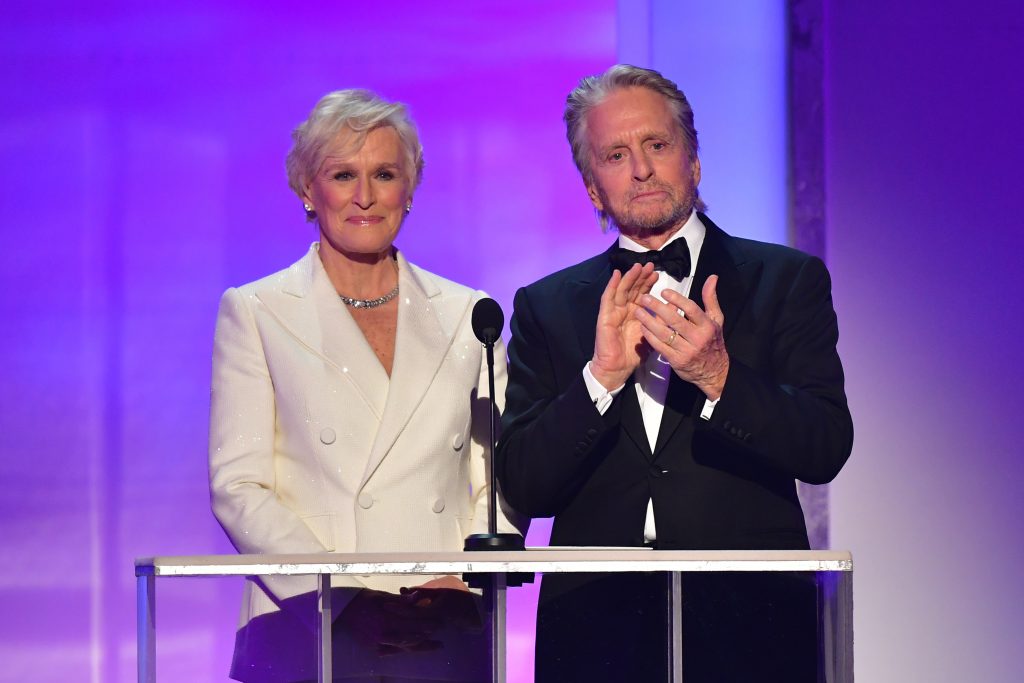 Glenn Close & Michael Douglas – If you look real close you can see Lady Gaga boiling a rabbit behind them! 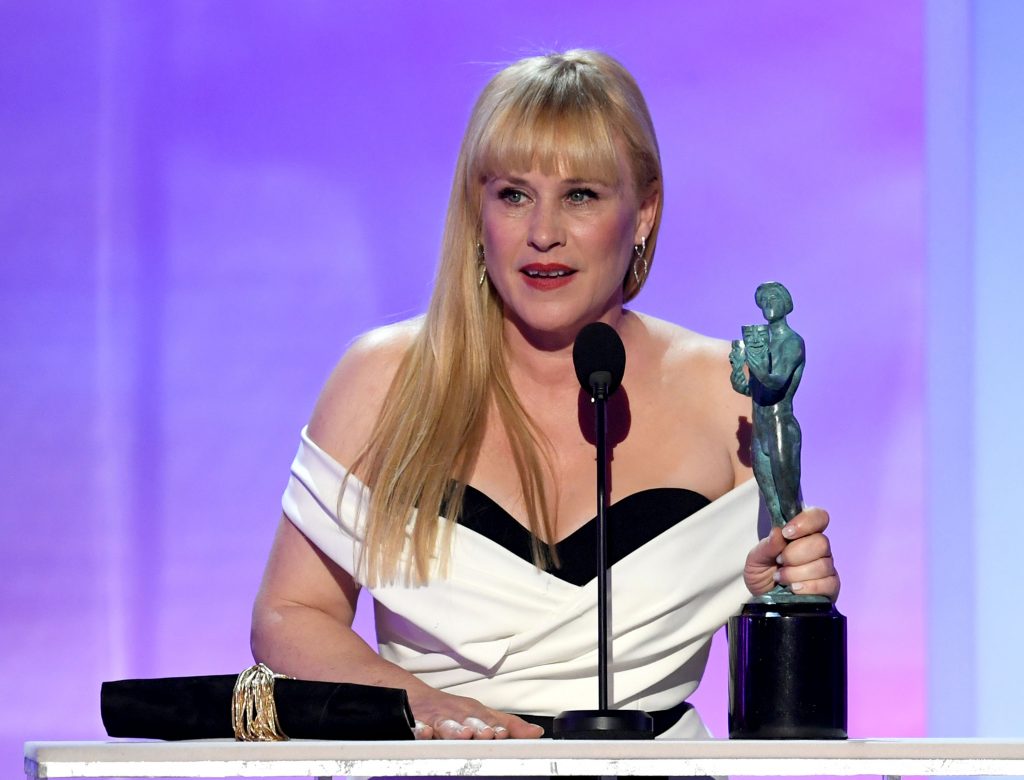 Patricia Arquette – If Patty can thank her co-stars, call out shady meal penalty infractions & praise Robert Mueller in a 90 second acceptance speech, you can get through Monday. 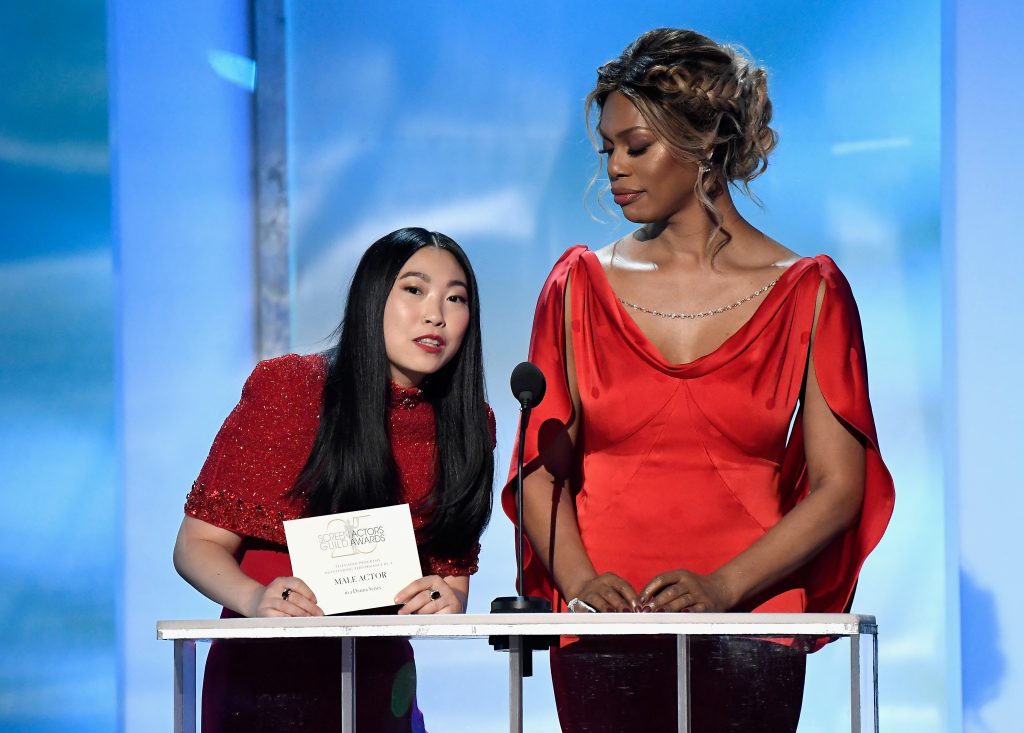 Awkwafina & Laverne Cox – This is the buddy comedy we need & deserve now! 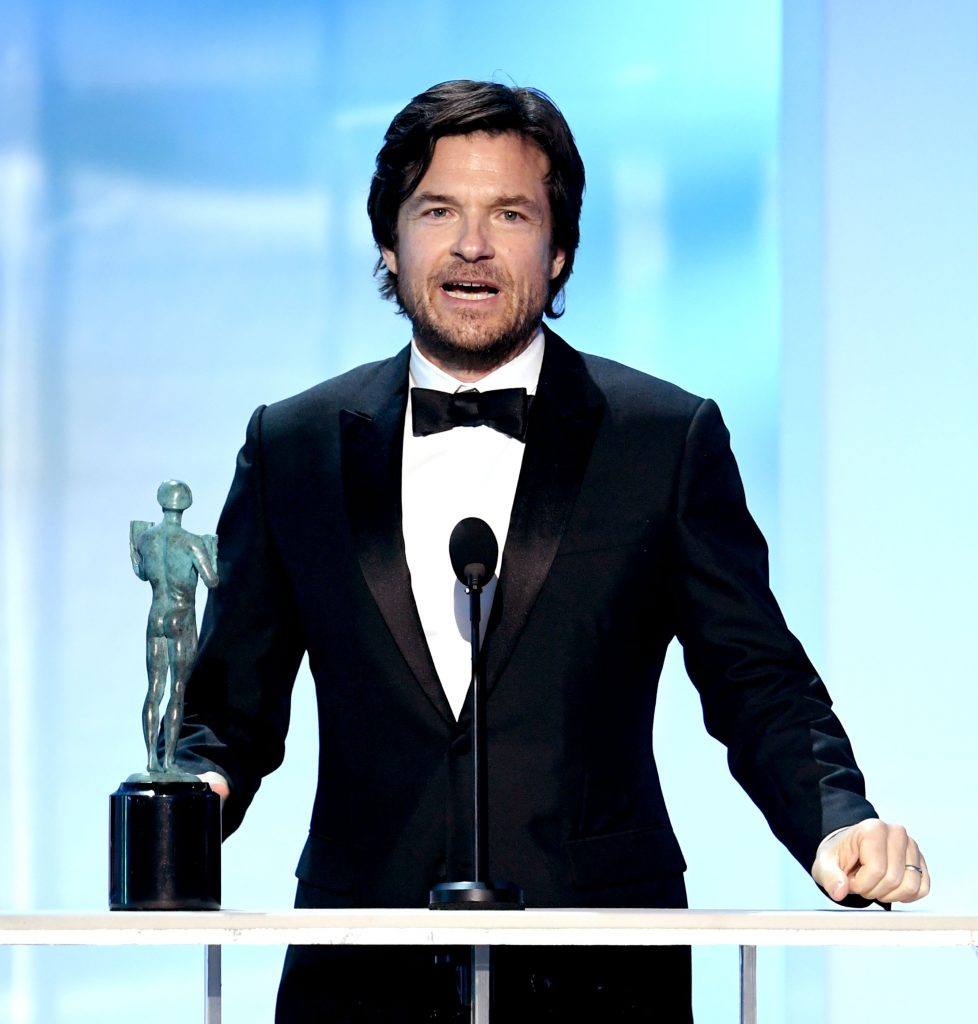 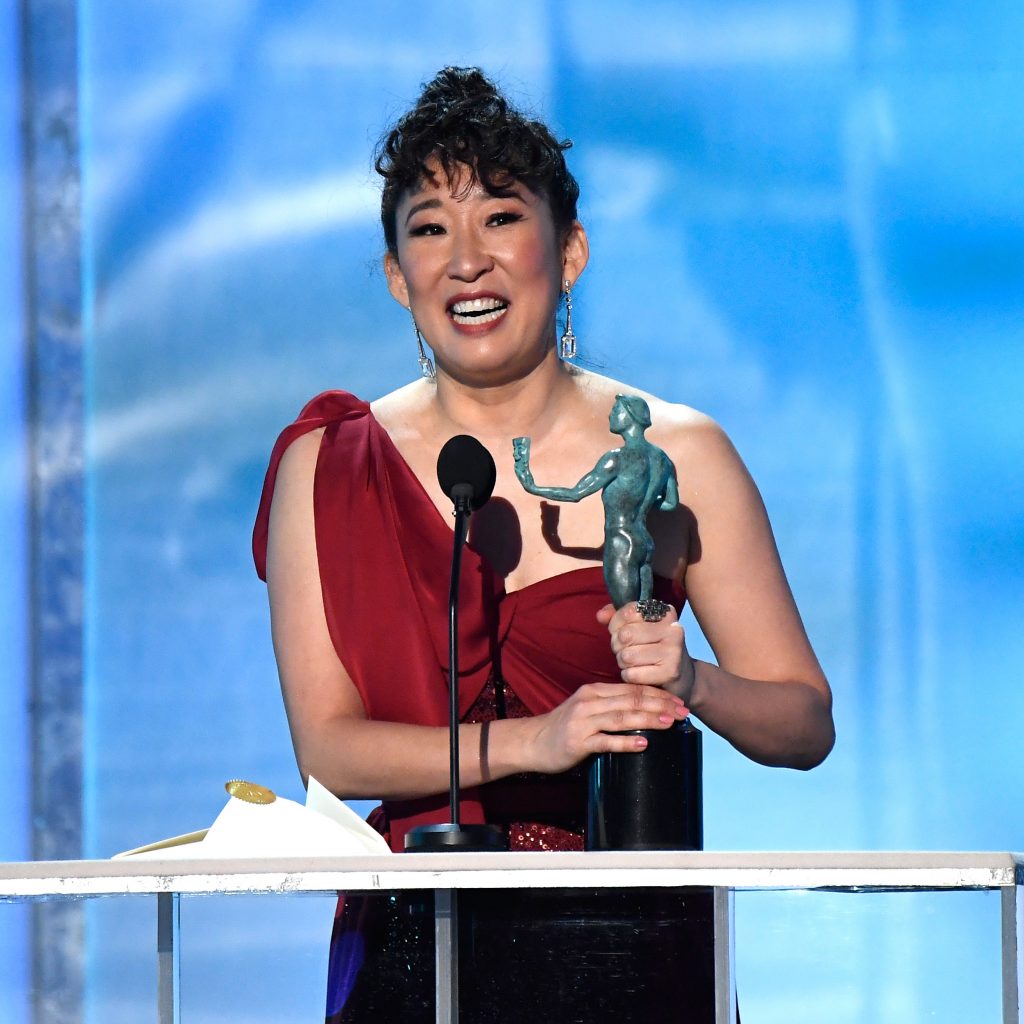 Sandra Oh – Eve Polastri for the win again! And just like that Grey’s Anatomy is officially no longer her most defining role. RIP Cristina Yang. 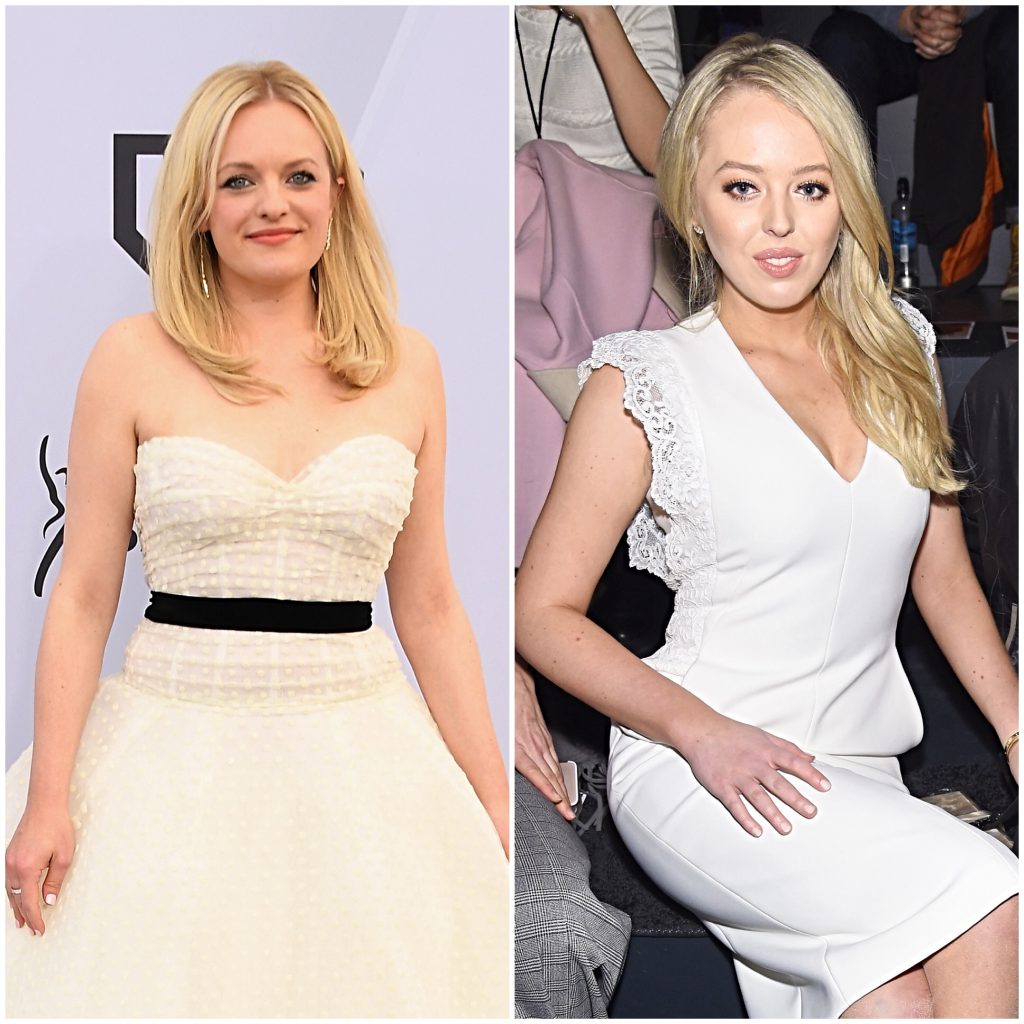 Elisabeth Moss – Is the Scientolo-star slowly trading one cult for another? Praise be, the Deplorables?! If Leah Remini can’t save her, maybe Nancy Pelosi can! 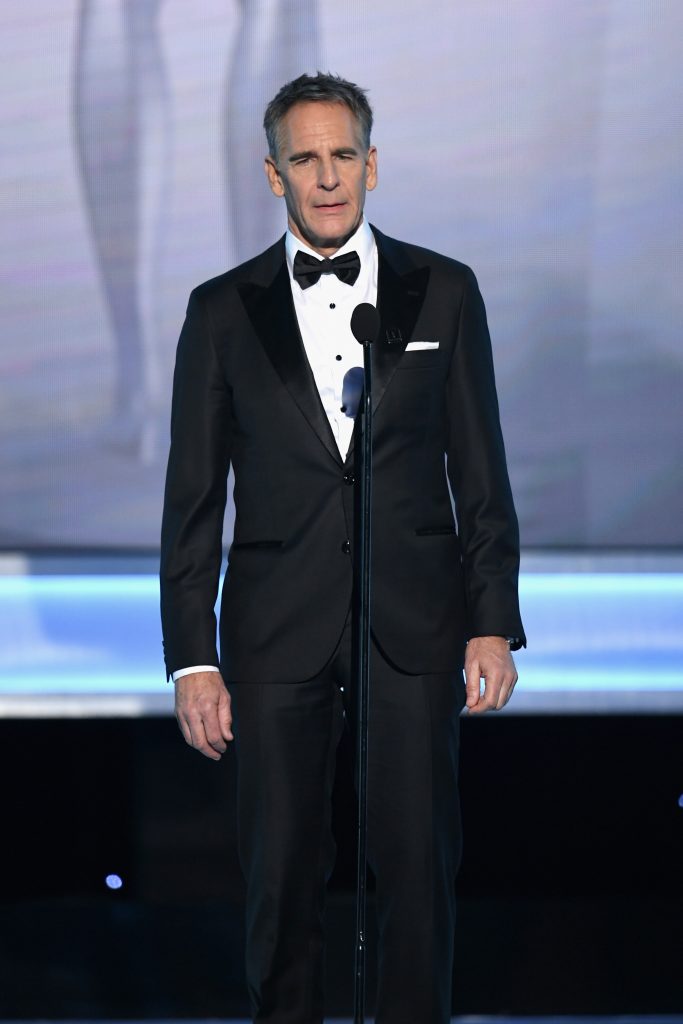 Scott Bakula – I don’t watch NCIS: Dayton or whatever, but dayum grand zaddy! The 64-year-old has taken a quantum leap back in time. 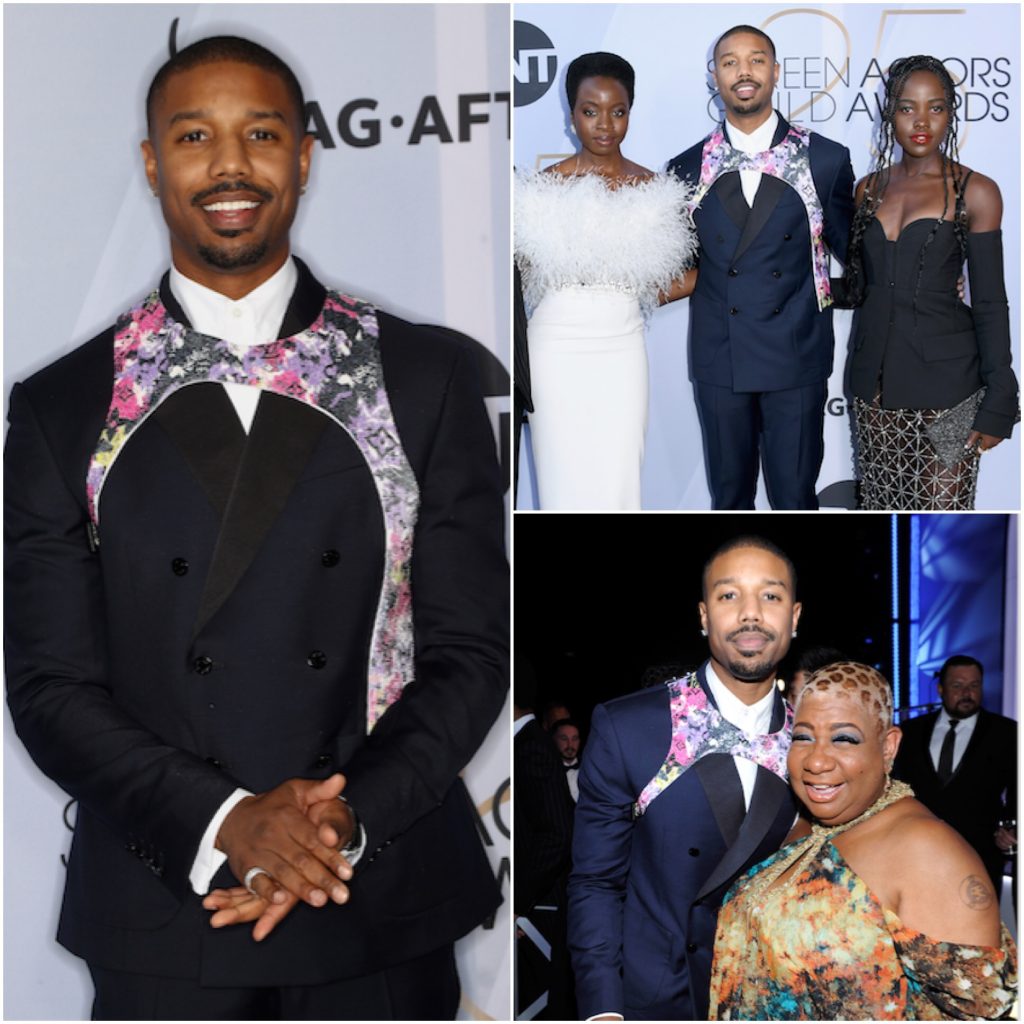 Michael B. Jordan – What in S&M Laura Ashley floral hell is this?! Everyone lied to Michael B. Jordan. Louis Vuitton lied. Michael’s stylist lied. His publicist lied. The entire cast of Black Panther lied. Even Luenell lied and she had cougar spots sprayed into her head! This is not Michael B. Jordan’s fault. Michael B. Jordan has been wronged and we are all to blame. We all cheered on Timothee Chalamet & Adam Rippon‘s previous award show harness moments as fashion forward and edgy and then we turned around and put a glorified baby leash on Adonis Creed! On Johnny Storm!  On mutha fucking Killmonger?! We are all garbage and the only thing that can undue the damage is a celestial body. And by that I mean a photo of Michael B. Jordan shirtless. 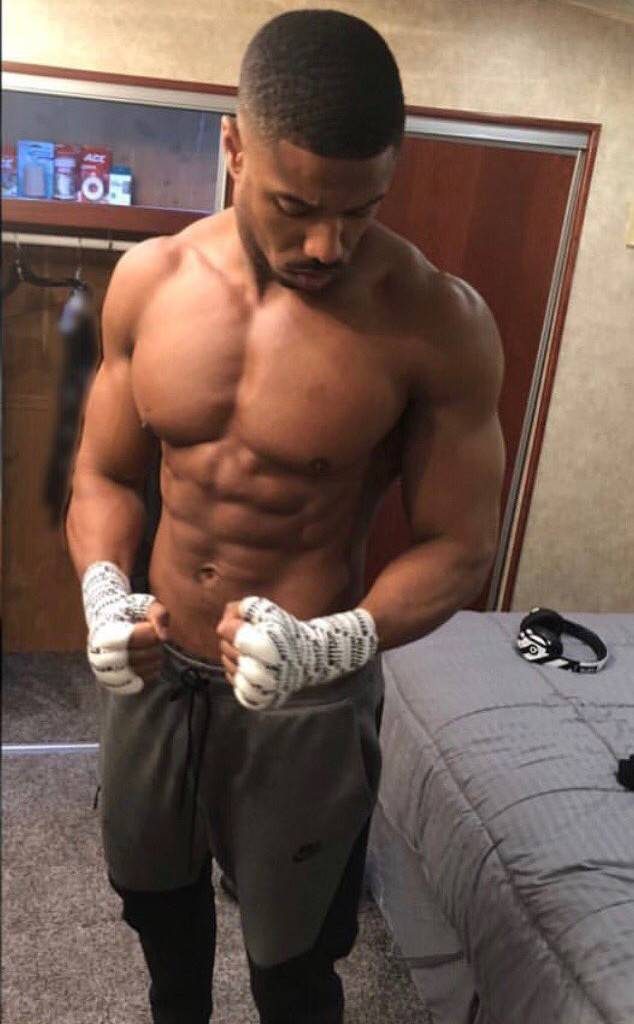 Phew! My chakras have been cleansed, balance has been restored & all is right with the world. We must never see or speak of that again. Namaste!

If you didn’t watch the SAGs and chose to catch RENT (not-so) LIVE instead, here is a 15 second (Valentina-free) recap.

PS: If you are keeping score, the Oscar frontrunners are now Glenn Close & Rami Malek for lead actress/actor, Mahershala Ali for supporting Actor (would be his second) and supporting actress a toss up between Amy Adams and Regina King. The Academy didn’t nominate SAG winner Emily Blunt. Stay tuned. #ForYourConsideration

Outstanding Performance by a Cast in a Motion Picture
Black Panther

Outstanding Performance by a Male Actor in a Television Movie or Limited Series
Darren Criss in The Assassination of Gianni Versace: American Crime Story

Outstanding Performance by a Male Actor in a Comedy Series
Tony Shalhoub in The Marvelous Mrs. Maisel

Outstanding Performance by a Female Actor in a Comedy Series
Rachel Brosnahan in The Marvelous Mrs. Maisel

Outstanding Performance by an Ensemble in a Comedy Series
The Marvelous Mrs. Maisel