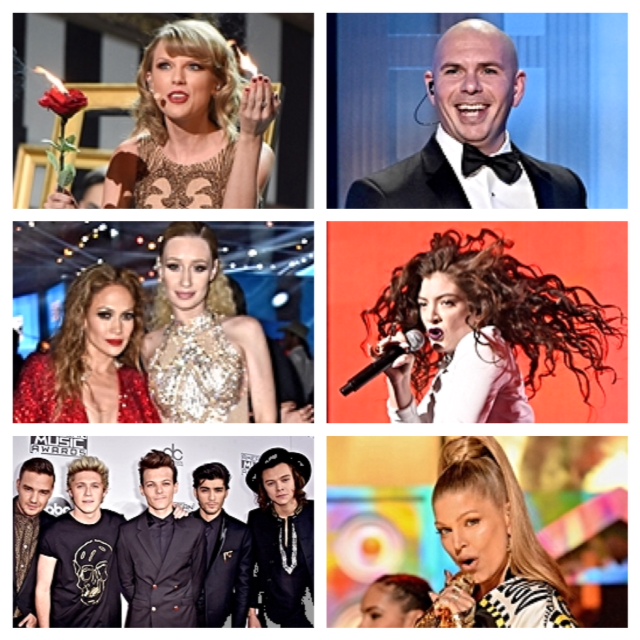 1. By the looks of all the homely gals in Rampage dresses, tickets to the ceremony were strictly available to students within the San Fernando Valley school district.

2. There is actually something more meaningless than an American Music Award, Taylor Swift’s entirely made up Dick Clark Award for Excellence. It too can be yours if you’ll splurge on Diana Ross’ appearance fee. 4. Don’t get your fake accent and ponytail twisted, Fergie has been doing the faux-ghetto pop/rap thang way before Iggy Azalea even got her first silicone ass injection. Trust!

6. One Direction consists of the cute one, the ethnic one, the dainty one, the one that should be in O-town and the one that looks like Chloe Grace Moretz. That’s my best guess, anyway.

7. Someone needs to tell Jennifer Lopez that Booty is the new fetch. It ain’t gonna happen, bae. But damn she can move.

8. Britney Spears is still a huge influence on the new class of female pop stars, as evidenced by their lazy, seemingly drug-induced live performances (I’m talking to you Ariana, Iggy, Selena).

9. At 26 and 22 respectively, Jessie J and Sam Smith are waging a semi-private battle with progeria.

1o. The casts of The Walking Dead & Orange Is The New Black will forever be known by their characters’ names. Pitbull — With apologies to People for the Ethical Treatment of Award hosts, but he needs to be put down. Mr. Worldwide nuisance. And being bilingual, I had no problem understanding his Spanish, unfortunately it was his attempts at English that had me completely baffled. Silencio! One Direction – I don’t know which one is gay, but I do know that at least two of them are lesbians. With 5 Seconds of Summer and all these other children running amok on stage, One D have instantly garnered some sort of cred for having at least been around since Obama’s first administration.

Ansel Elgort – The Fault In Our Stylists! All men may be created equal but not all can get away with a bolero jacket and printed leggings. Rita Ora and Julianne Hough – in Overdressing with the Stars! But in fairness, when your chances of attending a legit award show are nil, what are you going to save that Bebe Haute Couture for? Magic – So that’s what Adrien Brody has been up to. Of the crop of new male singers, he’s the only one to have not blown his new-found riches on hair and wardrobe.

Iggy Azalea – real name Amethyst Amelia Kelly – Take away the inner city accent and the butt implants and she’s giving you millennial Portia de Rossi. Her Cold Hearted Snake meets Olivia Newton-John Physical inspired performance of Beg For It was all about her male backup dancers. Call me! 5 Seconds of Summer – Proving that boy bands no longer require any cute members, but Drybar appointments and shopping sprees at Hot Topic are still mandatory. The Walking Dead ladies – For once the heads exploding were not on screen but at home as viewers tried to decipher if Michonne was Lupita (No!) and Maggie was British (Yes!). Imagine Dragons – If they perform a song and it’s not Radioactive, does it still annoy?

Crazy Eyes and Piper – They’re  better off having Laverne Cox do their hair in prison. Jhene Aiko and Meghan Trainor – They’re just days away from announcing their partnership portraying Mulan and Elsa in Disney Princesses on Ice. Luke Bryan – The country singer also known as …that kinda hot guy in marketing at your office. See you in the staff meeting, boo.

Lorde – real name Ella Marja Lani Yelich- O’Connor – I’m a fan and love all of her spaztastic moves. But the weirdest thing about her is that she’s friends with Taylor Swift. My ‘80s new wave high school self can’t comprehend that fact. It’s like trying to imagine Bjork and Debbie Gibson hanging out in 1989. Ew, Shake It Off! Ariana Grande – I’m just going to assume that if Lorde danced like she was having a stroke then Ariana must have suffered the speech impediment side effects.

Khloe, Kendall and Kylie – Kardashian triplets, as they all look 30 yet sound 16.

Selena Gomez – She needs to know her audience. If anything, people feel sorry that she dated Justin Bieber not that she broke up with him. Lil Wayne & Christina Milian – Their performance was audibly censored, not for profanity but as a gesture of good will toward viewers.

Nicki Minaj (performing with Skylar Grey) – Wearing a baptismal gown and a one of the wigs retrieved from my Halloween bin after 11 and a half months of storage. Diana Ross – Legend. Icon. The Boss. So how big a diva do you have to be to get someone to properly tug your wig forward a tad? Upside down you turn your weave! Fergie – She suffered a wardrobe malfunction, but at least she didn’t piss her pants. And no, she will never live that down. La la la la la.

Jennifer Lopez – Whether on the red carpet or on stage, she’s always FLAWLESS. Well except, that time she fell performing Louboutins, but whatevs. That Vegas residency is going to be the shizz! While I have your attention… my good friend Joshua Rogers has written a funny, romantic and realistic short-film called Pick Up, that chronicles as a young, gay man – who works as a driver for a ride sharing app – reveals his HIV diagnosis to a potential partner for the first time.

To get the film made, a Kickstarter campaign has been launched. I hope you can take a few minutes to check it out, donate if you can and help promote the campaign.