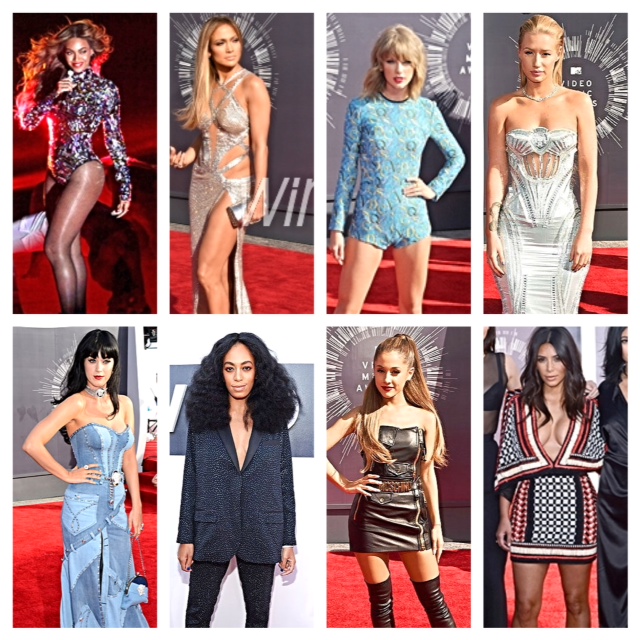 1. Sway is still fully employed … at least twice a year.

2. Nicki Minaj almost had the worst wardrobe malfunction of the night, second only to fashion fail queen Katy Perry.

4. The VMAs need to always be held in New York (and air live for the West Coast!). Maroon 5 in The Forum parking lot just can’t compare to Katy Perry singing under the Brooklyn Bridge or Taylor Swift performing on a moving subway train. 5. Chelsea Handler, Gwen Stefani and Kim Kardashian should star in The Injectables 3.

6. Twerking is dead. This year it’s all about co-opting homeless models.

7. With all these unsupervised childrens running amok on the red carpet, JLO came to school them all into submission …and perhaps find a new lover. 9. The world is going through some crazy shit right now with Ebola, Ferguson, Gaza, droughts and most horrifying … the upcoming Dumb & Dumber sequel!

10. SHE once again answered the question: Who Runs The World? With a generation growing up watching Idol, X-Factor, The Voice, America’s Got Talent, , the pop stars of today may know how to lip synch but they’ve forgotten how to PERFORM … as proven by this year’s litany of dud numbers. ‘Memba Madonna rolling around in a wedding dress to Like a Virgin or her incomparable Marie Antoinette Vogue masterpiece or even Britney’s so-bad-its-good Gimme More career implosion? The millennial wannabes of today need to stop taking selfies and get back to workin’ on their show game! Ariana Grande – Inglewood, we have a Problem … GapKids should not have an S&M collection! Thank God she can actually sing, otherwise we might have had to put her sleepy dance moves and My Little Pony hair extension out to pasture. Jessie J – I had no idea The Good Wife could sing like that! Katy ‘Always Gets It Wrong’ Perry – The best thing to come from her emulating Britney & Justin’s infamous denim ensembles from the 2001 American Music Awards was that we weren’t subjected to what she would have worn had she been left to her own devices again. This Is How We Don’t.

Lorde – Darlene Conner, is that you? Taylor Swift – Forum renovation or not, this is the first and last time you will see her in Inglewood. Shake It Off, strong enough for the radio but made for a hair commercial. Becky G & MTV host Christina Garabaldi – Wouldn’t their time be better spent accepting a rose from a Bachelor or something?

Jim Carrey & Jeff Daniels – Where’s Common ushering a moment of silence when you need him? Sam Smith – They call him the male Adele, not just for the amazing voice but because he too suffers from Progeria! He’s only 22! Taylor Lautner is OLDER than him. Usher – His next single should just be called Suit & Tie.

Nina Dobrev – I woke up like this! No, really, did you see her hair? Chloe Grace Moretz – In another homage to 2001 fashion, she was in Elle Woods drag. 5 Seconds Of Summer – Can you say OVER-STYLED? Not even KISS wears that much man product! Since Labor Day is in a week, does that mean they’ll go away then? Makes me nostalgic for the good ole days of One Direction & The Wanted.

Rita Ora – She normally looks like a cross between Gwen Stefani and Rihanna, but during her Black Widow performance she was all about channeling Mini Britney. Adam Levine – ‘Wait the hot guy on The Voice is in a band called Maroon 5?’ – said every teen girl in America.

Jennifer Lopez – Tens, tens, tens across the board! No one bought her last record (although it’s actually pretty good) but she’s still the hottest 45 around! Miley Cyrus – I’m all for her championing a good cause, but she should leave the waterworks theatrics for the Ice Bucket challenge. Beyonce – After a chorus of amateur opening acts, SHE reminded us there was time when the VMAs were filled with memorable, elaborate and properly executed performances. The Church of Beyonce is calling on you to prey. I hope all the pop toddlers sitting in the audience took out their BLUE books (is there an app for that?)  and LEARNED because you can’t figure out how to be a true STAR on the Internets or on a televised karaoke show! Flawless.

Jay-Z – Hova must have re-signed the contracts and made his penance otherwise he’s gonna see a billion dollars go down in an elevator! Solange – No she wasn’t sitting next to Jigga, Blue Ivy and Kelly Rowland in the audience, but that’s only because Bey was the last performer and the cleaning crew had to start immediately.

And now on to Emmy Monday …