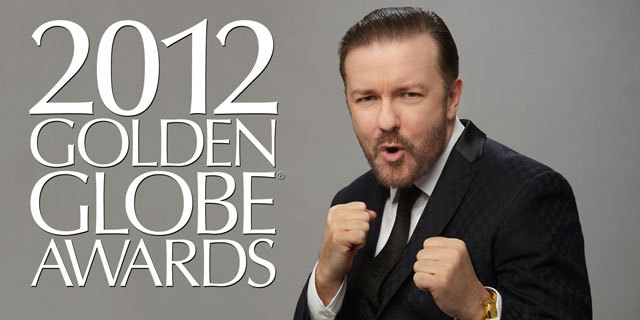 1. By bringing back a fingerless glove, crucifix and her black roots, Madonna proved her face isn’t the only old thing that’s new again.
2. The one person funnier than Melissa McCarthy… is her stylist.
3. Sidney Poitier is the new Kirk Douglas.
4. Apparently, Jane Fonda found the Fountain of Youth on Golden Pond.
5. Despite everything he’s done musically and all his AIDS charity work, if Elton John doesn’t chill and loosen up his girdle, he’ll just be remembered as a bitter old queen.
6. It’s 1999 again because Harvey Weinstein really is back on top.
7. Kelly Osbourne’s hair needs to be put down.
8. Sofia Vergara’s days may be numbered, because Salma’s back!
9. Ryan Gosling not showing up is cruel and unusual punishment.
10. Zooey Deschanel has sideburns.

It was the Washout Globes. From all the blah beige gowns to all the blah non-standout moments, this year’s Golden Globes were as funny and original as an episode of “Whitney.”

You know the drill. Here’s my two cents, so feel free to send me yours!

Ricky Gervais – Everyone who thought he was too mean last year is now saying how lame and neutered he was this year. But seriously, if picking on Jodie Foster’s lesbianism is the best and most original stuff you can come up with, you might as well just point and call Melissa McCarthy fat.

Ashton Kutcher – He got rid of the beard and actually looked handsome. Breaking up with Demi really does the body good.

Jake Gyllenhaal – The real reason Gosling didn’t show up. If those two are in the same vicinity at any one time, the room may instantaneously combust.

Melissa McCarthy – In JoAnn Fabrics Couture for Bed, Bath & Beyond. She looked like sheet.

Paula Patton – Her mission: impossible was trying to pull off that Tweety Bird yellow gown.

Sofia Vergara – At some point, even gorgeous gets boring.

Madonna – Between the death stares from Elton, Mary J & Latifah, the self-important acceptance speech and the made-up regal old English by way of suburban Detroit accent, the Bitch is back! Suck it, haters!

Kat McPhee – Just 27 and she’s already onto the third re-invention of her career. With reality TV, music and film behind her, perhaps scripted TV will be the charm. On a related note, Taylor Hicks – ‘memba him?

Brad Pitt – Am I the only one that thinks Angelina beats him?

Michelle Williams – Somewhere in an isolation sauna chamber in outer space, Katie Holmes is staring blankly into an E-meter and wondering where she went wrong.

Piper Perabo – She was robbed … of her breasts!

George Clooney – He’s too perfect. He has to have a really deep, dark secret he’s keeping on the down low. Wonder what it could be?

Stacy Keibler – I’m worried for her. I mean, she’s already appeared on “Dancing with the Stars,” so when Clooney dumps her she’ll really have nowhere to go.

Tilda Swinton – Hair and makeup by the Brian Setzer Orchestra.

Channing Tatum – Have they discovered which chromosome he’s missing?

Nicole Kidman – Ten years clean from Scientology and Nicole finally has womanly curves. Maybe there are perks to cutting off all contact from your two eldest children.

Jessica Lange – You know she’d rather win a bottle of Bombay Sapphire than a Globe.

Jane Lynch – By the looks of her top, she will never win Best SUPPORTING actress.

Octavia Spencer – This year, the part of Mo’Nique will be played by Octavia. Miss Minnie’s chocolate pie is the new pig’s feet!

Salma Hayek – She’s 45 and flawless in any language, and giving you Studio 54 chic.

Charlize Theron – Another one who is aging backwards. The only thing I loved her in more than “Young Adult” was that dress.

Jessica Biel – Was that an ill-fitting bodice or has she always had three breasts? Wasn’t Mark Wahlberg the one who was supposed to have three nipples?

Meryl Streep – Wearing the latest from The Temple Grandin Fall 2012 collection. The woman can act herself out of a brown paper bag, but unfortunately, that appears to be where she gets her evening wear, too.