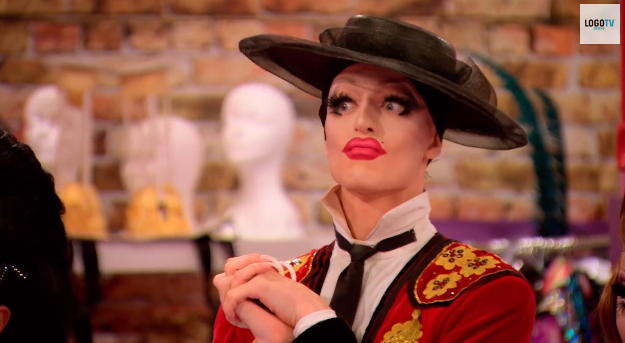 Just when you thought it couldn’t get any worse than bitter eliminated contestant Magnolia Crawford and her Kids in the Hall Chicken Lady glamour last week, along comes last night’s horror themed RuPaul’s Drag Race.

As the two groups merged and the Lee Press-On Nails came out, here are the seven things that made me scream:

1. Adore Delano
The “Drag Race Me to Hell” challenge had her looking like one twisted sister … serving lead singer Dee Snider realness. But never mind her Rite Aid weaves and Katy Perry outlet makeup jobs—for Adore it’s all about dragging … her vowels. And while sounding like a whiny, spoiled, 15-year-old Thousand Oaks teen girl is not anything to aspire to, Little Miss American Idol somehow makes it all werk for huh. I give her props, because if you’re going to be ratchet, then you gotta be like Oprah and just OWN it. And she does. J’Adore.

2. Linda Blair & Lena Headey
The two guest judges were serving up some amazing drag of their very own. While neither looked like men in wigs, they were both almost completely unrecognizable.  With apologies to Courtney Act, brunette Lena’s transformation from her Game of Thrones character proved that Cersei Lannister was the hottest queen last night. But it’s Exorcist star Linda Blair who has really sold her soul to the devil, because the 55-year-old has held up better than Darienne Lake’s control top pantyhose.

3. Gia Gunn
Between not getting a DeLorean reference and being confused by the state of campy ‘60s black and white cinema, the Kardashian-toned “ums” spewing from GG’s expressionless mug were the scariest part of this week’s horror challenge. Forget messy, cheap or manly queens, Miss G, because everyone knows the most irritating one of all is a dumb one! An extra special kudos goes out to RPDR for continuing its groundbreaking work … no cliché smart Asian stereotypes here.

4. The school of Bianca Del Rio
The library is open and class is in session, so take out your blue books and learn, hunties. Queen B’s side eyes, ‘mmmm hmmms’ and acid tongue sage advice are proving she’s this year’s standout for shade tutorials. Whether summing up Laganja Estranja in three words—‘irritating, young and foolish.’ Can I get an Amen?—butting weaves with Gia or explaining the near impossibility of Beyoncé drag to Trinity, it’s all about Ms. Del REAL. Preach!

5. Milk does a runway good
Somehow his Pinocchio meets Juliet Prowse meets Michael Alig demented club kid serial killer saunter has me transfixed. With so many interchangeable fishy queens milling about trying to out-read each other, my money’s on the high-heeled Party Monster with all the facial props. He nose what’s up.

6. Song choice
Now, we’ve all suspected producers have purposely picked out certain songs to favor a particular contestant in the past. So NYC underground freakazoid Vivacious having to lip sync to Latina pop sensation Selena Gomezwas the gift that kept on giving … to April Carrion. Feliz Cumpleaños, loca.

7.Vivacious
There was one thing more aggressive, fierce and commanding than her walk … MUTHA’s voice. I’d listen to that beyatch READ the phone book. And unlike her pre-pubescent millennial competitors, this kween knows how to annunciate. Okaaaaaay! Unfortunately, looking like the bastard love child of Grace Jones and a satanicTeletubby didn’t have her snatching any trophies, but at the very least it will have the ‘90s chilrins googling Leigh Bowery. It’s this year’s Grey Gardens, boo boos. Learn it. RIP, Ornacia.

Until next time, sashay away.