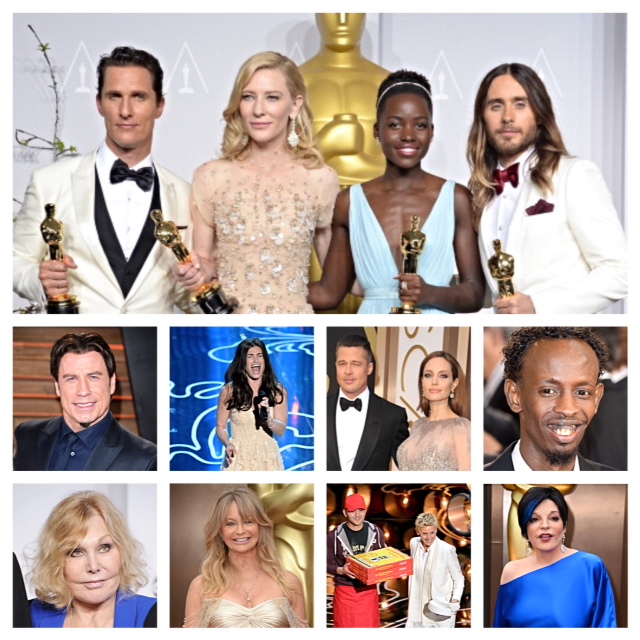 Overall it was an historic evening, as a film helmed by a black director – Steve McQueen for 12 Years a Slave — won best picture and a Hispanic — Alfonso Cuaron for Gravity – won best director at a show hosted by a lesbian and overseen by the academy’s first black president.

Yet the biggest take away from this year’s Oscars is a gigantic flub from a beweaved closeted homosexual that introduced the world to a now famous non-existent pop star. Ellen DeGeneres — That pizza wasn’t the only thing she phoned in.

Anne Hathaway — She really knows how to get tongues wagging …  with the epileptic seizures caused by the EDM laser show emitting from the bodice of her dress. Which is one way to wake people from the year long coma induced by watching Les Miserables.

Jared Leto — Thankfully, he listened to his publicist — and Twitter  — and mentioned AIDS sufferers in his speech. So McConaughey wins an Oscar for losing weight and he gets one for impersonating co-star Jen Garner? Poor Leo.

Jim Carrey — ‘Memba him? Between him and Zellweger, there must be a Me,Myself & Irene curse.

Pharrell Williams – Wearing shorts on the red carpet. Who does he think he is, Demi Moore? And yes ‘Happy’ is catchy and corny, but if he can get Lupita to bust a move then it’s all good. But Christian Bale ain’t budging.

Naomi Watts and Samuel L. Jackson — Or as Sam Rubin from KTLA would say, Kristen Bell and Laurence Fishburne. Hair & Makeup Oscar winning ladies from Dallas Buyers Club — Or was it the girls from your company’s accounts payable department?!

Harrison Ford — in Indiana Jones and the Earring of Doom.

Kim Novak — It’s great to see her back … from the Island of Dr. Moreau. The irony of having her present best ANIMATED film to FROZEN was lost on no one.

Sally Field — She looked fantastic and proved you can age gracefully — with a human face — in Hollywood. We like her. We really liked her.

Zac Efron — Almost as pretty as Jared Leto … but without the lace front weave.

Karen O — Who knew the L-train went all the way to the Dolby Theater? Kate Hudson — Gorgeous.  But she of all people should take heed of the McConaissance, stat! Unfortunately, it will probably take more than a 50 pound weight loss to save her from the depths of romcom hell. How to lose a career in 10 films.

Jason Sudeikis — DAMN! When did he get so hot? Such a dramatic transformation and he isn’t even playing an AIDS patient! So either Olivia Wilde is the true Supreme or she’s about to give birth to Beelzebub.

John Stamos and Lady Gaga at the Oscars — What? Why? How?

Brad Pitt — He now officially has it all. Has anyone checked on Jen in the last 24 hours?

Liza Minnelli — The woman breaks her hip when the wind blows, so they transported her across the country to honor her mother … by having her stand up in her seat for four seconds? It’s hard out here for a legend. But she did accost and hug Lupita, so I guess it was worth it. Chris Hemsworth & Charlize Theron — Descending from the heavens … and into the Hollywood and Highland shopping mall.

Lupita Nyong’o — The Jennifer Lawrence Era is officially over. America’s new sweetheart has been crowned, headband and all.  She could have worn Bjork’s swan dress or Celine Dion’s reverse tux and still wind up on everyone’s best dressed list. She’s one classy lady and hit all the right notes in her speech, especially when winning a superficial award for devastating and brutal subject matter. Take note, you know who.

Academy President Cheryl Boone Isaacs — Showcasing the new Academy museum as designed by the producers of HER. Pink — She soared to new heights and all without her usual circus theatrics or silks. Impressive, indeed.

Jennifer Garner — Jared & Matthew get Oscars and she gets “she’s one of the most beautiful actresses ever” intro … I guess that’s a better than Mrs. Ben Affleck or star of 13 Going on 30.

Bette Midler — Same age as 68-year-old Goldie but without all the scar tissue. Did you ever know that you’re MY hero?!

John Travolta — Did he have a stroke?  Or does his wig doctor just need to loosen his plugs a notch? As we speak, the Church of Scientology is investigating to see if Leah Remini was fucking with the teleprompter. Back to the auditing session he goes. Penelope Cruz — She had her own Adele Dazim moment by presenting the award for Best Adapted …”Scrimpling?” Que?

Angelina Jolie – Just stunning. I could watch her stare at me all night.

Cate Blanchett — With her deserved win for Blue Jasmine, can she now give back the Oscar for her caricature impersonation of Katherine Hepburn in The Aviator? I’m not kidding. Matthew McConaughey —  I thought he stopped reciting cheesy lines when he gave up the romcoms. God. Heroes. Himself. All right, all right, all right, was that an acceptance speech or some weird leaked Scientology video?  Ugh, this undoes all my True Detective love. Just take your shirt off, pretty boy.

Julia Roberts — Frumpy Woman. She should be taking career advice from Meryl, not fashion tips!

Will Smith — The Razzies were the night before so what in After Earth hell is he doing introducing Best Picture?