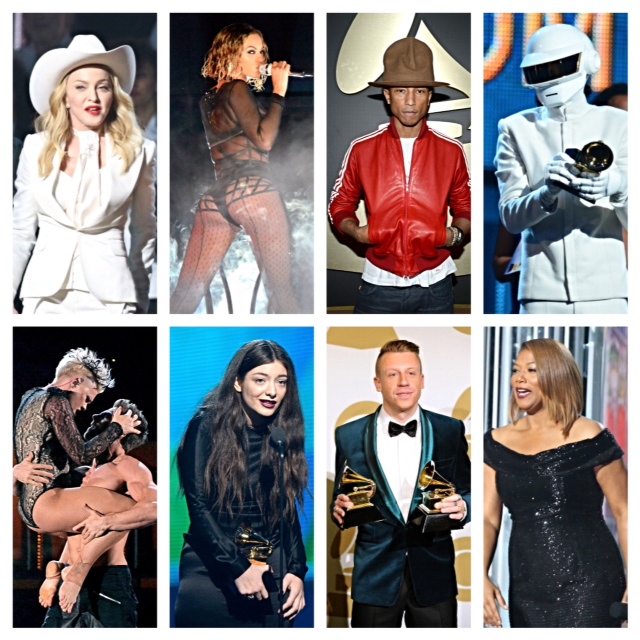 Beyonce — The new Queen of Pop gave the best Ciara performance ever. Surfboard.

Pharrell — And the first Grammy-inspired Halloween costume of the year is born.

Lorde — Hands down the best album by a seven-year-old poltergeist.  She’s 17 going on 43.  It’s Darlene from Roseanne meets Amy Irving in Carrie with Japanese hair straightening and a pair of Joaquin Phoenix’s HER pants. Regardless, that awkward teen is one talented beyatch! Team Lorde all the way.

Katy Perry – She really needs to stop shopping at the Lady Gaga 99 Cent Store. That performance was amazing … had it been the spring musical at Hellen Keller High.

Robin Thicke – Is it safe now? Are we assured we’ll never be subjected to Blurred Lines again? Please say it is so.

Keith Urban – Nicole Kidman divorced a gay man to marry a gay woman. Only his hairdresser will know for sure.

Pauly Perrette – She’s been on a hit CBS show for over ten years that no one I know watches yet the network rewards her by making her work a job more suitable for Kaley Cuoco’s stand-in. That’s some NCI … B.S.

Bruno Mars — It’s Alicia Keys had she not become famous. He’s so convincing that I bet Latifah tried to get his number. One dollar to anyone who can explain how the hell he got the Super Bowl gig.

Pink/Fun — I love me some Pink. She’s an amazing singer and performer. Her body and athleticism are beyond. Her concert last year may have been the best show I’ve ever seen. And we get it. You can work a silk like it’s nobody’s business. But the acrobatic jig is up. Time to learn to walk tightrope or pick up a new gimmick because you’ve spoiled us.  At this point seeing her twirl in the air above the Staples center while singing live is like a ghost of VMAs past. No offense but it’s true. But PS, she should be the one performing at the Super Bowl!

Ozzy Osbourne — It’s not nice to speak ill of the dead.

Ringo Starr — Sorry Ringo but it’s all about his wife Barbara Bach. The former Bond Girl is 66 and looks fantastic. That is some mighty fine upholstery work.  All this time I thought she was British, turns out she’s a Queens girl from Jackson Heights. Get tha fuck outta here, loca!

Imagine Dragons/Kendrick Lamar — I thought radio killed Imagine Dragons for me but after that performance they have been redeemed.

Kacey Musgraves — Megan Fox with a twang. Poor thing needs to stay away from the Katy Perry sample sales. Winner of worst performance slot … appearing on a Staples-adjacent stage. At least the audience could get a view of her as they walked to the bathroom.

Gloria Estefan– She may have 2 titanium rods in her back but unlike Madonna — who is a year younger — Gloria doesn’t need animatronics to shut her eyes.

Douche Punk — The only way to redeem themselves for the tired & pretentious robot act would have been to accept the Album of the Year by removing the helmets to reveal … Tina Fey & Amy Poehler. Or to keep it CBS friendly, the Two Broke Girls.

Stevie Wonder — Can someone please plug in his mic … and unplug Pharrell’s?

Cyndi Lauper — 30 years after winning Best New Artist, she wins a Grammy for Kinky Boots.  Girls just want to have a career as long and successful as her!

Carole King/Sara Bareilles — Basic bitches for the win. Just two talented singers and pianos. No dancers, smoke machines, costumes, circus acts or helmets. In this day in age, that’s what you call BRAVE.

Steven Tyler/Smokey Robinson — Are those the remaining Pointer Sisters? My 95-year-old aunt has no problem with gay marriage. But these two androgynous, bejeweled, fibre glass divas? That is something she just can’t wrap her head around.

Metallica– At what point exactly did lead singer James Hetfield turn into a TimeWarner cable guy? Can you hook up my Roku too?

Macklemore & Lewis — It was their night. They never looked better. I just feel bad for their poor future ex-girlfriends sitting in the audience.

Same Love — I’m not going to harp too much on having a closeted celebrity officiate the ceremony. Or that CBS aired the segment at a ‘safe’ post 11pm time slot or that they failed to show any (same-sex) couples kissing. I’m just going to revel in the fact that for 5 min they aired a ‘rap’ act — and MADONNA! — singing about equality, love and being gay, without using any euphemisms, that sent a loud & clear message and created a historic memory for 33 loving couples on national TV. And since not everyone, believe it or not, lives in NY or LA, that’s a pretty big deal.

Queen Latifah — I’m all for your baby steps, gurl. But it’s getting ridiculous. Godspeed, Dana.

Mary Lambert — Looked fantastic, minus the dreadful exposed tattoo and gown combo that no one can pull off. No one.

Madonna — Haters gonna hate. She’s 55 & still serving it. Get over it, children. Bey, Katy and Gaga will be lucky to get bashed by future 20somethings should they still be around at the 2045 Grammys to perform with Suri Cruise.  I’m sorry but Boss Hogg knows how to make a performance entrance. Open your heart, ageists.

Miranda Lambert — Malin Akerman is that you? From country bumpkin to Trophy Wife!

Yoko Ono — The woman is 80. Fuck what ya heard, she’s the Supreme, bitches.

Alicia Keys — Those are some damn nice pecs, lady.

Nine Inch Nails — Trent Reznor should be thanking the Recording Academy. Because rolling credits during his performance & then tweeting ‘Fuck You’ to the Grammys gave him the opportunity to still seem remotely punk rock. A feat nearly impossible after winning an Oscar.