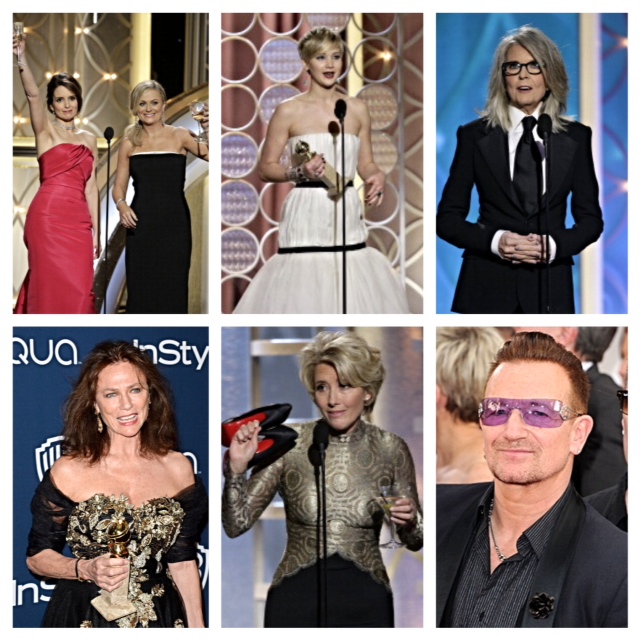 1. Tina Fey & Amy Poehler: The Sequel was even better than the first.

2. Jacqueline Bisset is the recipient of this year’s Elizabeth Taylor Gladiator Memorial Award.

3. What would really be “brave” is if hetero actors received some sensitivity training before accepting their awards for playing gay characters. Am I mincing, Michael?

4. Orange is the new crack! Bronzer has taken over as the drug of choice for Hollywood’s male stars. (Bradley, Leo, Channing, Liam, Pine, Farrell etc ..) Just say no!

5. With so many emaciated slicked heads running amok, the red carpet hairdos looked more like a wildlife triage center after the Gulf spill.

6. Only nine months until Halloween and Jennifer Lawrence’s coffee filter chic is the new Miley VMAs.

7. ‘Brooklyn Nine Nine’s’ win is so sketchy and controversial that authorities are checking Gov. Christie’s emails for clues.

8. That Brooklyn accented girl in ‘Wolf of Wall St. ‘(Margot Robbie) is Australian? Get the f*ck outta here!

10. The craziest thing about Diane Keaton last night, besides everything, is that she looks like skinny Paula Deen.

Not being able to watch the Golden Globes live sucked. Don’t ask.

As always, feel free to send me your words and comments.

Sandra Bullock — 50 & fabulous. She’s defying gravity with her flawless face. But that dress should be lost in space. RIP color blocking, please.

Lupita Nyong’o — Perfection. This is how you make your Hollywood entrance. Though every time I hear her first name, I keep thinking my 95-year-old aunt in Hialeah is going to come into the room. Tia?

Julia Roberts — Reporting for work at Deloitte & Touche. This is what Shelby Eatenton Latcherie would look like had she lived! Drink yer juice, gurl!

Jacqueline Bisset — I actually don’t think her speech was that insane considering she was shocked and had probably just finished her fourth gin and tonic. Plus, she wasn’t the only one who thought they’d never give it to an older actress for work on a show on STARZ! I bet Sofia Vergara said crazier shit when her name wasn’t called. Between the win and being name dropped by Lisa Vanderpump on Real Housewives last week, Jackie is definitely having a moment.

Hayden Panettiere — or was it Sharon Stone’s lesbian lover Roxy in Basic Instinct??

Megan Mullally — She’s a little old to be playing Velma from Scooby Doo, don’t you think?

Elizabeth Moss — for the Scientolo-win.

Gwyneth Paltrow — I wonder what GOOP.com would say about drinking out of plastic water bottles?

Paula Patton — For once that really annoying white mass glued to her side wasn’t Robin Thicke.

Alex Ebert  from Edward Sharpe & the Magnetic Zeros (the guy who won for Best Score) — He won for ‘All Is Lost’ but was totally representing for LINCOLN.  Congratulations! Partying on a boat with Diddy is the holy grail of hipster doucheism. Somewhere in a high rise in Williamsburg they are erecting his statue.

Bono — Speaking of douche, enough with the Dame Edna glasses already. And now that Guy Oseary is working with U2, how long before we $ee a Bono & Madonna duet?

Diddy — Do not try to hug Bono. EVER.

Taylor Kinney — The weirdest thing about Lady Gaga is that she’s dating a hot frat boy who looks like he should be on ‘Vanderpump Rules.’

Rob Lowe — Rockin’ the One Direction hair … for men.  Zac Efron in 15 months.

Jon Voight — It’s not an award show until his white scarf shows up.

Robert Downey Jr — I’ll have whatever drugs he was on in the 90s! He and his career have never looked better.  Hold on, Lindsay. Hold on!

Kyra Sedgwick & Kevin Bacon — Kyra has some ‘splaining to do because daughter Sosie (Miss Golden Globe) looks more like Khloe Kardashian than any other Kardashian!

Robin Wright — House of double stick tape! Love her and her sideboob! Divorcing Sean Penn does wonders for a woman’s career. It’s all about CLAIRE Underwood, people.

Jared Leto — Now we know he did BRAVE drag for the role, but who is responsible for the man bun?

Colin Farrell — Loving his reaction during Jared’s acceptance speech. Jared makes one movie in 6 years and gets an award … without having to go to rehab or suffer through an unnecessary Total Recall reboot first! It could have been him up there … if only “Mary Poppins” author P.L. Travers’ father had been a transgender person with AIDS.

Emma Thompson — She’s a grown woman. She can do whatever she wants.

Andy Samberg — The secret to having an award-winning comedy series… have a FOX executive write a check to the Hollywood Foreign Press.

Emma Watson — Every guy in the world has a chance with Emma, because if she’ll wear pants under a gown on a red carpet, then she can be talked into doing absolutely anything.

Frances McDormand — spotted … at the Plymouth Rock Globes. Nothing beats her denim jacket at the Tonys that year. Nothing.

Diane Keaton — Coming soon, the Mia Farrow smackdown outside Zabars. At least one riddle was solved tonight: why she usually wears gloves!

Ben Affleck — The success bloat is back.

Inside Llewyn Davis — All this time I thought the main star (Oscar Isaac) was David Krumholtz from Numb3rs. For reals. On top of that, Oscar (last name Hernandez) is hot in real life and Cuban. Crazy!

Jessica Chastain — She left her hair dye in for zero dark thirty minutes too long.

Matthew McConaughey — He beat out Chiwetel Ejiofor. Really? Well, Matt was also 12 years a slave … to his romcom past.

“Sarah Paulson — is the Bette Davis of America?” Whatchu talking about Steve McQueen?