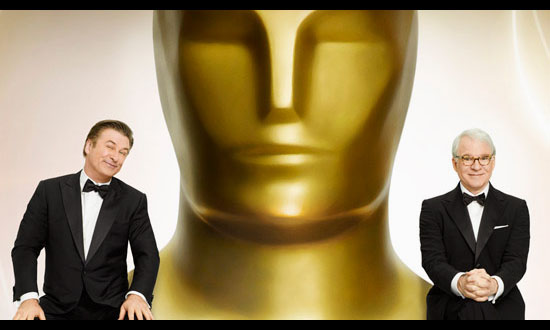 2. The ABC pre-show proves there’s a very good reason why Kathy Ireland was a model.

3. Silver and gold are the colors to wear this season … if you want to look washed out.

4. With apologies to Miley, Zoe and Kristen, but the Oscars just aren’t the same without real Hollywood glamazon presenters like Nicole, Halle and Salma.

5. Musical opening, Brat pack reunion, Taylor, Zac, Jake and Ryan, horror movie tribute and So You Think You Can Dance. Had there been a runway walk off I’d swear I had produced last night’s show. Thank you, Adam Shankman.

7. If Mimi & JLo are both on the Oscar red carpet you have ask them about “Glitter” and “Gigli”! Where’s Joan Rivers when you need her?!

8. I thought “Mom, I’m gay” we’re the most difficult words I’ve ever had to utter until … “Sandra Bullock, Oscar winner.”

The Davey beat Goliath Oscars. The War of the Roses Oscars. The Sandra Bullock Won Oscars. Whatever you want to call ‘em, I thought it was one of the faster paced shows in a while…which isn’t really say much! So whether you watched them or not (some people don’t watch the Oscars???) here are my thoughts on last night’s Gay Super Bowl. As always feel free to send me your thoughts and comments. And if you want to be added to my distribution list shoot me an email with your info at:

Neil Patrick Harris – And you thought Hugh Jackman was the only musical theater-trained gay actor that could host the Oscars?! Consider NPH’s 2011 host audition complete.

Penelope Cruz – Why is it that people have no problem with an actor with a French, Italian or German accent, but Penny’s Spanish accent is always critiqued for not being perfect English? Tell me how many non-English languages you can speak, sing, act and dance flawlessly in? Gracias!

Christoph Waltz – Anyone else thing Hans Landa was gay? How else do you explain his last scene in “Inglorious Basterds”? Without spoiling it for those who haven’t seen it… if you could only save one person in your life, who would it be? Your husband/wife? Your mom? A good friend? Or your BOYFRIEND? BINGO!

Ryan Reyonlds – Presenting one of the nominated films. Thank You, Adam Shankman.

Cameron Diaz – Gorge. Stunning. Someone got some new Rosacea meds b/c it was the best she’s ever looked. Perhaps her stylist should pick out her movie roles too.

Miley Cyrus & Amanda Seyfried – Proving not all Hollywood starlets are created equal. Amanda was dressed for the Oscars, while Miley was heading to her best friend’s shotgun wedding picnic in Kentucky. Can teens get osteoporosis? Stand up straight, Miles!

Chris Pine – Presenting one of the nominated films. Thank You, Adam Shankman.

John Hughes Tribute – In case you didn’t realize, the Academy would like to remind you that aging sucks! No matter how well you think someone has aged, they haven’t! Exhibit A: Matthew Broderick. Exhibit B: Alec Baldwin. Exhibit C: Everyone in any John Hughes film.

Judd Nelson – Will the last person to leave the Kodak Theater please make sure Judd has enough change for the bus home.

Anthony Michael Hall – His face has been through some Weird Science.

Macaulay Culkin – How the hell is THAT with Mila Kunis? BIZARRE!

Emilio Estevez – Looks like everyone forgot about him or did Charlie Sheen’s fucked up life dramz keep him from the “Breakfast Club” reunion?

Zoe Saldana – How do you say “WTF are you wearing?” in Na’vi? Since no one knows she’s in “Avatar,” at least she’ll be remembered for wearing this purple color-blocked feather duster koosh dress.

Documentary Short/Kanye Moment – Fave moment of the night was watching that “Music by Prudence” queen get bum rushed by that crazy Real Housewife of Long Island in her purple Barney duster. Security!

Adapted Screenplay for “Precious” – Of all the scenes they chose to air the clip where Precious steals the fried chicken? Really?

Queen Latifah – Looking slimmer. And no, she wasn’t in “Precious.”

Lauren Bacall – The only thing worse than never winning an Oscar … getting an HONORARY Oscar. Wah Wah Waaaaah. You know she still hasn’t forgiven Juliette Binoche for stealing her Supporting Actress award in 1997.

Mo’Nique – Groundbreaking! The first hairy-legged woman to win an Oscar! But the tone of her acceptance speech was so angry I thought she was gonna throw a TV at my head, make me eat hairy pigs feet or tell me to come up and make mama feel good!

Colin Firth – Will never look as good as he did in ‘A Single Man’ … none of us will.

Tom Ford & Sarah Jessica Pretty – So pretty, but what was up with SJP?! Give us more Carrie Bradshaw, and less Carol Brady. And the whole Bram Stoker’s Dracula hair just didn’t work for me. FAIL

Costume Designer winner Sandy Powell – Bitch! Attention all future Oscar winners: dedicating your THIRD win to all the losers in your industry is like saying your filet mignon at The Palm is for Haiti.

Kristen Stewart – Looking about as comfortable in a gown as Jodie Foster and Queen Latifah. If you think she’s really dating Robert Pattinson, then I also have a really nice bridge in Brooklyn for sale.

Horror movie tribute – Sadly, “Leprechaun” is the only time a clip from a Jen Aniston film will ever be shown at the Oscars. The biggest omission of the night wasn’t Farrah or Bea Arthur from the dead montage but “The Ugly Truth” from this horror homage.

What’s with all the creep blonde winners for “Hurt Locker”?

John Travolta – Who died and told him he could wear jeans to the Oscars? Oopsies.

Sandra Bullock – All I knows is that if I was gonna win an Oscar I wouldn’t have worn that dress …or the Maybelline fuchsia lip tint. Kudos for acknowledging the gays and for the touching mom speech. I know a lot of peeps are up in arms that she won an Oscar, but in her defense, Sandy was one of the only redeeming things in Coinky Dinks i.e. “Crash” and was pretty good in whichever Truman Capote biopic she was in. Besides, Julia Roberts and Reese Witherspoon have Oscars and they ain’t exactly Hepburn or Streep either!

Demi Moore – 47 and flawless. Introducing the In Memoriam because she will live forever!

In Memoriam – Still so weird about Brittany Murphy.

Best song nominees – You can’t sing at the Oscars, but James Taylor can!

Jennifer Lopez – You thought her dress was strange? Well, it’s what all the girls are wearing to their quinceneras … on Planet GaGa.

Forest Whitaker – Was he on some episode of Celebrity Fit Club that nobody knows about? The lovely bones.

Sean Penn – He was more intelligible as Jeff Spicoli. Sober up, Sue Ellen!

Barbra Streisand – She couldn’t get Hillary in the White House but she helped get Kathryn B into the history books. Papa can you hear that!

Kathryn Bigelow – Kat’s two wins make her the new deuce Bigelow! What woman is about to make Hollywood history and doesn’t bother to get her hair done??? Can you believe she’s 58? I hope she used her Avatar to sleep with James Cameron when they were married.

James Cameron – How long before he trades in his 5th wife Suzy Amis for an upgrade? Which by the looks of Suzy’s ashy, brittle veneer, could be Farrah or Bea. Somewhere Linda Hamilton is laughing hysterically … while cutting her arm.

Gabby Sidibe – That bitch is fearless, working all these award shows like she’s done it for years. I just wish the media and everyone else would stop treating her like she’s a Make a Wish kid having her dreams come true or some sort of reality show contestant who magically won an Oscar nom. Every time she’s interviewed you can almost hear the “Ahhhhhs.” Stop! She’s a grown ass woman! She really isn’t the character Precious. Her dad didn’t rape her and she can read!!!

Maggie G — I loved her dress … when it was my cousin’s childhood bed sheets. It’s a perfect outfit for dinner at the Captain’s table, not the Governor’s ball.

Vera Farmiga – Unless you are 22 years-old and weigh 100 lbs that dress just makes you look like you are about to perform ‘La Isla Bonita” on whatever cruise ship Maggie was on.

Jeremy Renner – How many chicks do you think he banged last night?

George Clooney – Shaved his beard and then brought one on his arm.

Kathy Ireland – For the same effect, ABC should have saved their money and just put a crash test dummy on the red carpet instead.