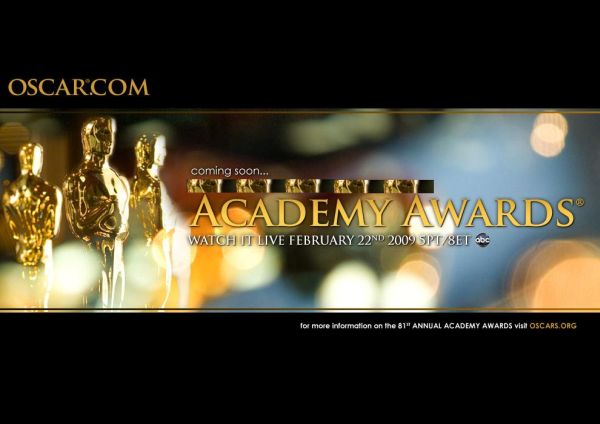 1. Musicals are back, except on Broadway. RIP Grease, Gypsy, Hairspray, Spamalot, Spring Awakening.

2. With song & dance numbers, Jackman, Beyonce and “Milk”speeches, it was the gayest Oscars since … last year. So sick of hearing “they were so gay.” Um, it’s the Oscars not NASCAR, when were they ever not gay? Get a grip, foolios.

3. “Slumdog’s” 65 wins assure that we have officially outsourced everything to India. Press 3 and a customer service rep will transfer you to an Oscar winner.

4. Getting previous winners to introduce the acting nominees was cool, although I was afraid the losers might get zapped into the Mickey Rourke career black hole by the Board of Elders. Have mercy on us, Eva Marie Saint! Beam me up, Christopher Walken!

6. Other than Brangelina, Alicia Keys’ $4 Canal Street wig and the “Slumdog” kids, the red carpet was about as fun as watching “Revolutionary Road.” Let everyone do the red carpet next time!

10. The only upset was me – because “Slumdog” won so many damn awards. If you thought Mickey was gonna beat Sean then you clearly put too much emphasis on the sham that is the Golden Globes.

For your consideration … my Oscar recap. Send me your comments, thoughts and criticisms; you know I love to hear them.

Hugh Jackman – What in the world would make people suspect that a good looking man with sculpted pecs and abs, that can sing and dance well, loves musicals, has no biological children and is married to a significantly less attractive woman, could possibly be gay?! Now that’s just crazy talk.

Whoopi Goldberg – Seeing her in that leopard print dress was the only thing more ridiculous than the fact she won an Oscar for “Ghost.” She didn’t win for “Color Purple.”

Tilda Swinton – Bird face! Hair by Gordon Gecko. Top by the costume department at Bellevue. What a corporate secretary might wear at a law firm on “Gattaca.”

Penelope Cruz – Screw “Slumdog,” “Vicky Christina” was my fave movie of the year. Latest member of the Hollywood pretty female Oscar winner club. Penny now proves the theory; if you get with Tom Cruise and leave before the thetans devour your soul you will get an Oscar. While it worked for Nic, Mimi Rogers is a lost cause – she’s full Scientolocrazy, but there could still be hope for Katie. Run, Suri, run!

Steve Martin & Tina Fey – They better be careful because no one can get away with mocking Scientology. Well, except for Kidman, but it did cost her two adopted children.

Jennifer Aniston – Angie may have Brad, Oscar and the kids, but what does Jen have that Angelina doesn’t? One really stupid braid across her forehead and a great year round tan.

Peter Gabriel – I don’t get him. He won’t sing an edited down version of his nominated song but has no problem going to the Oscars in that Last Samurai tux?!

Dustin Lance Black – He told the gay youth of America what so many don’t have the balls to say. Thank you. The Asian dude may have been funnier, but this was the best speech of the night.

Domo Arigato, Mr. Roboto – And Styx suddenly jumps to #1 on iTunes, as soon as the kids Google it and find out what it is.

Sarah Jessica Parker – It’s getting severe up in here. Yikes! Between the “Square Pegs” hair and her comedy & tragedy mask bone structure, I barely noticed her tits and the city.

Ben Stiller – Would have been really funny had someone else not done the exact same impersonation the day before at the Independent Spirit Awards. Still funnier than anything “Focker.”

Jessica Biel – Did she lose a bet? How else to explain the “Fact of Life” Jo Polniachek hair and a gown from the slightly irregular section at Linens n Things?

Hugh & Beyonce number – Sweet dream or beautiful nightmare? At least it wasn’t boring, right? Beyonce needs to go away for at least a minute. No more performing at award shows, sporting events, inaugurations, Burger King etc … Go take a vacation, get pregnant, go visit Michelle Williams at the Olive Garden. Anything, but just stop. You are more overexposed than a pic of a battered Rihanna.

Zac Efron – Grease is the word.

Cuba Gooding – The real reason they had him back to the Oscars was so they could repossess his. There is no humanly way possible to make up for “Boat Trip.”

Kevin Klein – He’s contractually bound to let Phoebe Cates out of the house every five years or so. But from the looks of her dress, he hasn’t in about 15.

Will Smith – His endless presenting was almost as difficult to get through as “7 Pounds.” Here, give my eyes to Woody Harrelson!

Alicia Keys – Kim from “Real Housewives of Atlanta” is gonna be pissed when she sees Alicia dyed her $7 polyester wig chestnut brown.

John Legend – Peter Gabriel is about to take a sledgehammer to John’s head for agreeing to sing his song.

“Slumdog” songs – I swore that was Eva Longoria or some unaccounted for Kardashian singing. Say it with me, Jai Ho!

Frida Pinto – Gorgeous. Watch as she follows in the steps of Keisha Castle-Hughes or Catalina Sandino Moreno and exits stage left … forever.

Queen Latifah — The one gig Beyonce turned down. Latifah has been reduced (figuratively speaking of course ) to singing for the dead. RIP.

Reese Witherspoon – Her dress may walk the line between atrocious and abominable, but she still gets to sleep with Jake Gyllenhaal. Jokes on us.

Sophia Loren – Somewhere between her Italian snarl, giant breasts and arm at the hip pose is some sort of casually orchestrated diva diss aimed directly at Meryl. Arrivederci.

Halle Berry – Quite possibly the most beautiful woman in the world.

Nicole Kidman – acting as elder buddy/praiser/introducer to Angelina Jolie was mindbogglingly bizarre. Like watching mythical deities Aphrodite talk to Eve … in front of you … and on TV.

Marion Cotillard – acting as elder buddy/praiser/introducer to Kate Winslet just didn’t seem right. You know Kate was like ‘I’m about to win my Oscar from this young French chick? Oh bloody hell no!”

Melissa Leo – I swear it was my mom’s sister in Miami. Tia Hortensia, eres tu?!

Brangelina – Bow down, the King and Queen have arrived. I love how they manage to transform the red carpet into a “Mean Girls” high school cafeteria – with everyone else trying to get a morsel of the capt of the football team and head cheerleader. OMG, look over there. It’s Jen Aniston sitting with the band geeks!

Kate Winslet – The Susan Lucci streak is over. Another pretty Oscar winner and she is now the only viable heir to the Meryl Streep throne of peer praise. Still gorgeous despite exhuming Grace Kelly’s waterproof Aqua Net helmet ‘do. Love the dad whistle. She’s the king of the world!

Anthony Hopkins – Can someone please feed him some fava beans and a nice Chianti?!

Mickey Rourke – He should have won an Oscar … in special effects – for his face! Now that he’s back, before you know it he will be starring in a Kate Hudson romcom … or “Mask 2: Rocky Dennis Lives.”

Robin Wright Penn – She’s got gams for days!! Now if only Sean would let her have a career. Looks like Robin and Phoebe Cates have some chatting to do.

Sean Penn – I really can’t stand that he’s BFFs with Chavez and Castro and spews all that “its not so bad over there” nonsense, but what was there not to love about his performance or speech? Sexy, super masculine, married Madonna and played Harvey Milk perfectly. A hetero male gay icon is born.