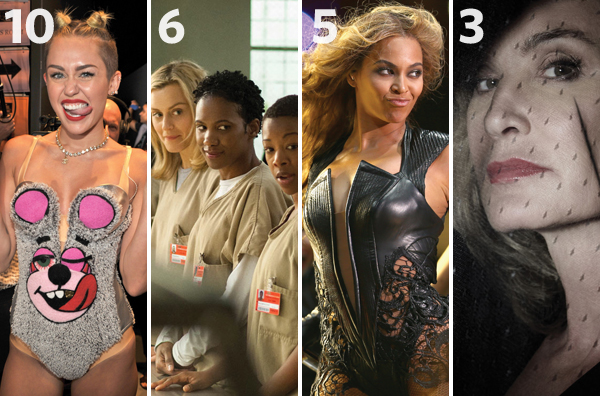 My top 10 televised moments which ran in Frontiers Magazine. With apologies to Honey Boo Boo and Kris Jenner’s evil empire, these were the year’s best televised moments.

Whether twerking at the VMAs, smoking a blunt at the EMAs or flashing her adorable pussy at the AMAs, 20-year-old reformed Disney baby Miley Cyrus had everyone sticking their tongues out as she shed her skin while simultaneously committing murder on awards show stages around the world. RIP, Hannah Montana.

Just when you thought it was safe to never see another Tara Reid movie, Sharknado happened. Syfy channel’s awesomely terrible B-movie about a freak storm that causes shark-infested tornadoes to ravage Los Angeles was absolutely the best comedy of the summer. Unfortunately, the CGI unearthed to help Ian Ziering hack his way out of a great white’s belly still wasn’t as cheesy as his hair on Beverly Hills, 90210.

8. THE SOUND OF MUSIC LIVE

The hills were alive with the sound of everyone throwing shade at Carrie Underwood’s acting. Despite her line-reading skills, NBC pulled off the impossible and made three hours of live musical theater “Must-See TV.” The fact that it was a ratings hit assures that we’re about a year or two away from watching Mandy Moore and Ashanti in Cats. Now and forever!

Every awards show needs more T&A—Tina Fey and Amy Poehler. The reigning queens of comedy hysterically ripped on everyone from James Cameron to James Franco and even managed the perfect closing line after a certain rambling quasi-coming out speech—“Good night, everybody. We’re going home with Jodie Foster.” The ladies are hosting next month’s Globes, and chances are their sequel will be even better than the first.

6. THE RISE OF NETFLIX ORIGINALS

This year Netflix started creating original content, and it had the likes of HBO and AMC shaking in their critically acclaimed series’ boots. With all-new episodes of House of Cards and Orange Is the New Black available at once, Netflix changed the television programming landscape and made binge watching more fun than binge drinking. Cheers to Season 2!

Following in Madonna’s footsteps, Beyoncé brought 13 minutes of fierceness—and hordes of gay viewers—to the most-watched television program of the year, the Super Bowl. Throw in a Destiny’s Child reunion featuring Kelly and Michelle shooting up from under the stage and we’ll let slide that Mrs. Carter had the nerve to end her weave-tastic performance with a ballad. I can see your hell no!

You know, the one where Lena Dunham played ping pong with Patrick Wilson in the nude—and everyone shrieked.  After getting past the misogynistic rants of how unrealistic a coupling it was, this fantasy episode took a break from Hannah’s usual narcissism and entitlement to perfectly highlight the vulnerability, hopes and insecurities so prevalent in one’s 20s. If you don’t think a guy would sleep with someone half his age who isn’t the standard notion of beauty and who just happens to show up at his front door, you’ve obviously never used Grindr.

What AHS lacks in scares this season is more than made up for by showcasing three stellar actresses at the top of their game (Jessica Lange, Angela Bassett, Kathy Bates) battling it out Drag Race-style for the best lines with even better wigs. Throw in the amazing Lily Rabe and a landslide of Stevie Nicks adulation and you’ll see why this season is supreme.

The roller coaster ride that was the Prop. 8 case received the storybook ending we all dreamed of when local news stations aired outgoing L.A. Mayor Antonio Villaraigosa marrying plaintiffs Paul Katami and Jeff Zarrillo live on June 28. For once there was a reality show we could be proud to watch.

Speaking of weddings, the most controversial one of the year did not involve a Supreme Court case or same-sex couples. In one of the most violent and brutal episodes to air on television, HBO’s Game of Thrones killed off a slew of main characters and dethroned Dynasty’s “Moldavian Massacre” for bloodiest wedding reception ever. The Red Wedding is the only thing—on TV, at least—that will leave you gagging from getting so much head.