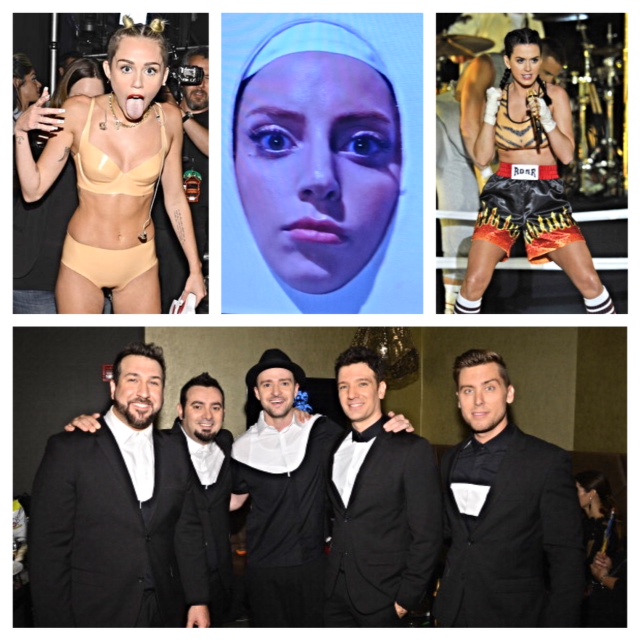 1. Lady Gaga has stopped copying Madonna and moved on to co-opting herself, The Flying Nun, SNL, Grey Gardens & Barbarella. Now if only she’d forget all the wigs & theatrics and take her own advice … Just Dance!

3. Miley Cyrus’ performance was brought to you by Beacher’s Madhouse, Amanda Bynes … and every trailer park east of San Bernardino. RIP Twerking.

4. Kanye West is now taking music advice from Kim K … because I haven’t heard anything that badly auto-tuned since her song “Jam (Turn It Up).”

9. T-Boz is trying to look like a middle-aged data entry clerk at Time Warner Cable … in Detroit. She (and Chilli) need a stylist stat! They’re not 26, people.

10. When you look up the word ‘wrong’ in the dictionary, Katy Perry’s picture comes up. And you’re gonna hear me SNORE!

With no Britney implosion, Madonna kiss or Kanye ramble, this year’s VMAs will be remembered as the night Miley Cyrus bludgeoned, sodomized and left Hannah Montana for dead in order to writhe her saggy ass in a flesh-colored bikini with teddy bears and married men. Party in the USA!

Lady Gaga — With apologies to “Roar” and no matter what Billboard says, “Applause” really is a bigger hit in da clubs. Props should also be given for performing after undergoing major hip surgery just a few months ago. And lastly, you gotta love a gal who puts on more weaves in three minutes than an entire season of RuPaul’s Drag Race. Now if only she’d stop all that highfalutin nonsense about art and culture and just focus on making great pop songs maybe some of the haters would ease up. Finally, someone please tell Gags to give up on all that bizarro insane asylum imagery and videos, it’s already been done … by her!

Austin Mahone — His ushering in the return of the horrendous 90s boy band fashion is the true sign of NSYNC’s resurgence. All these WannaBiebers need to understand that all the leather getups and beanies in the world won’t make their high fructose corn syrupy songs and shaved pits tough. PS his last name sounds like the Spanish word for turd. De verdad!

Ariana Grande — Wait, so all this time that song “The Way” wasn’t by Mariah?? Who knew?! Every time I hear her name I think I’m in line at Starbucks … or Taco Bell.

One Direction — Their name refers to which way they swing. Your guess is as good as mine. And when did Harry Styles morph into young Kevin Bacon? #zerodegrees

Selena Gomez — She won for “Come and Get It,” but from the looks of her revealing Versace gown someone already came and got it. Styling by Janet Jackson.

Miley Cyrus — Good golly, Miss Molly! Congrats! She has finally found a way to break Billy Ray’s achy breaky heart. But does it really matter what anyone thinks, when you’re trending on Twitter? Winner of this year’s Britney Spears Live Stage Implosion Award. “We Can’t Stop” is the new “Gimme More.”

Lil’ Kim — It’s amazing what the peeps at Madame Tussauds can do these days. Put ya lighters up, in memoriam of Kim’s original face!

Jared Leto — or was it a makeup-free Courteney Cox? I didn’t realize ombre hair extensions came in Mens.

Kanye West — I’m so over keepin’ up with this Kardashian.

Daft Punk — Will the two guys they hired off Craigslist to wear the helmets and go to the show while they stayed home and counted their money please stand up?

Ed Sheering — Imagine a world where female pop stars with his level of physical attractiveness were allowed to exist. Can’t do it, can you?

NSYNC — Rockin’ the black and white Pilgrim chic. That ‘reunion’ was also JT’s way of saying we will never do a Backstreet Boys/NKOTB/98 Degrees Mortgage Tour. Bye, bye, bye.

Danity Kane — If you announce a reunion and nobody covers it, does it still make a noise? Apparently not. Damaged, indeed.

Jennifer Hudson — No question she has an amazing voice and looks fantastic. But, unfortunately, I didn’t have same love for that crop top. And I can’t change … but she could have.

Rihanna — I’m convinced she only went to make Drake and former BFF Katy Perry uncomfortable, because she looked even more bored sitting at the Barclays Center as we all did at home.

Drake — So does a Canadian TV series really qualify as starting from the bottom?

Katy Perry — Serving some Joanie “Chyna Doll” Lurer realness … in her performance AND the red carpet. Ripping off Sara Bareilles, jumping rope like Madge, performing exactly where Xtina did 11 years ago … wait which one is Lady Gaga? At least her performance featured that hot bearded hipster muscled dancer. Dayum!

… All sleep till Brooklyn.