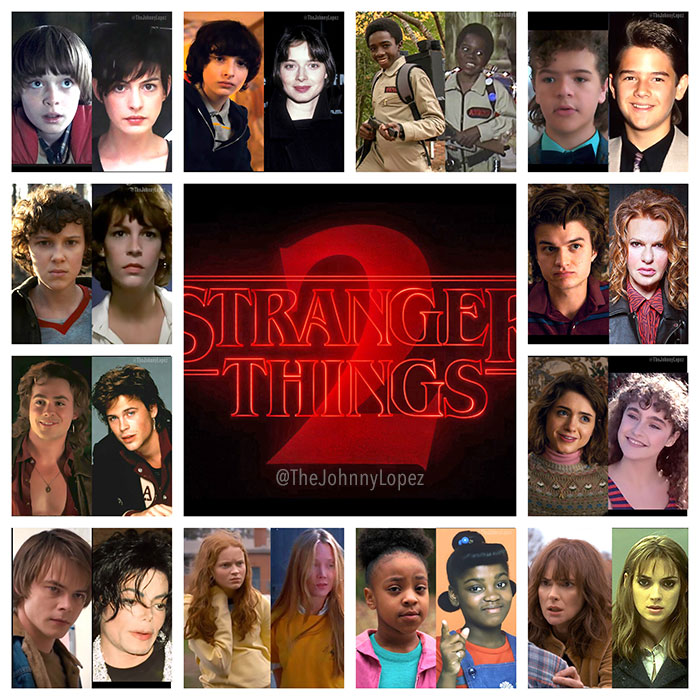 After finishing the second season of Stranger Things, I couldn’t help but find each of the main characters’ Upside Down bizarro twins.

With the exception of Will, they all have a doppleganger that referenced a star or character from the ’70s, ’80s or ’90s.

Anyway, enjoy the fruits of my lazy Sunday and trust there are no spoilers if you haven’t finished yet. Sure Will’s got that Joey Lawrence Gimme a Break Dorothy Hamill ‘do, but the only thing scarier than surviving the Demogorgon is that Anne won an Oscar for singing! I Dreamed a scary Dream! There are worse things for a 13-year-old boy to be compared to than the eternal beauty of Lisle Von Rohlman from Death Becomes Her. The scene was straight up Duckie in Pretty in Pink, but Dustin’s weave was the quintessential ‘short but long’ cut of my guido high school and this ’90s child star. Eleven is truly the scream queen for a new generation. Ladies love them and their luxurious Fabergé sprayed hair. Speaking of hair, don’t forget they say the accessories make an outfit It’s all about being an ’80s It girl. So be careful, Nancy! #WhereAreTheyNow The wispy hair, the delicate features, the pale complexion. Maybe I’m the only one that sees it, but Jonathan makes me want to SCREAM! A redheaded girl without many friends. Hold the pigs blood, because Max has got the power! Can you say scene-stealing wisecracking younger sister? Then how about, “No Roger, No Rerun, No Rent!” No one does frazzled anxiety quite like Nona. She also hasn’t aged in 20 years. You can’t steal that from Saks! And if you need something else to binge, check out my podcast SCREAMING INTO TRAFFIC!  for all the week’s loud & proud pop culture noize. It’s funny, I swear!