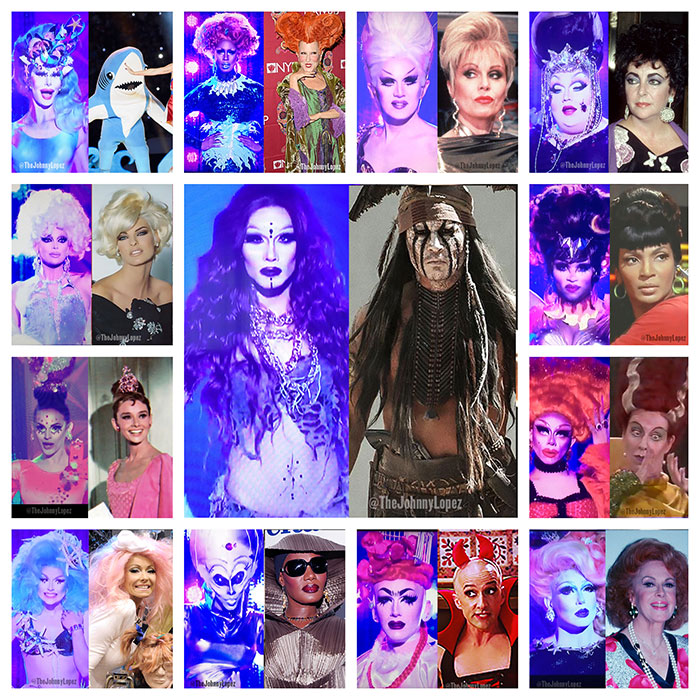 This week RuPaul’s Drag Race was all about the fairy tales.

And while some of the kweens got dragged for their princess lewks, (ahem, Farrah Moan, Aja, Kimora Blac) I think they all failed with that whole come up with an interesting sidekick thing. Well, minus Nina Bo’ Nina Brown, who continues to be fierce AF!

Three things I loved this week:  1. Cynthia Lee Fontaine‘s “cucu” explanation. Culo. Caca. Cucu! By the way, still not sick of it. 2. Alexis Michelle reading the Instagram children for their over-reliance on Facetune. Preach! I’ll say it again, If I can tell you used Facetune, you failed! 3. And, on a serious note, managing to touch on the Pulse tragedy. ??

Congrats to Aja. She hasn’t won me over, but she did own that performance. Disastah it was not. I’m still holding out for a hero, but Bonnie Tyler would be proud.

And while we are getting closer and closer to Snatch Game, here are the week 3 side-by-sides. This week was the toughest yet. Enjoy! She won this week and proved she really is fishy. 2. Shea Culee is werking her magic.

Hocus pocus, she could win it all! But she is a sweetie, darling! 4. Eurkea is a screen legend. V is for Vogue!

Yeah, I know Cheyenne Jackson referenced Linda Evangelista, but it’s what I was thinking too. I swear. 6. Peppermint is out of this galaxy. Bride of Frankenstein be damned, being compared to Carol Burnett is always a compliment. 10. Nina Bo’Nina Brown is keeping up with the Jones. 11. Alexis Michelle is a plain Jayne. 12. Sasha Velour, you little devil, you.

She’s bringing the Community together with this getup. #JimRash Since tonto in Spanish means dumb, she nailed it. Bye gurl, bye!

But if you want to get some feels for Kimora, check out this week’s UNTUCKED below.