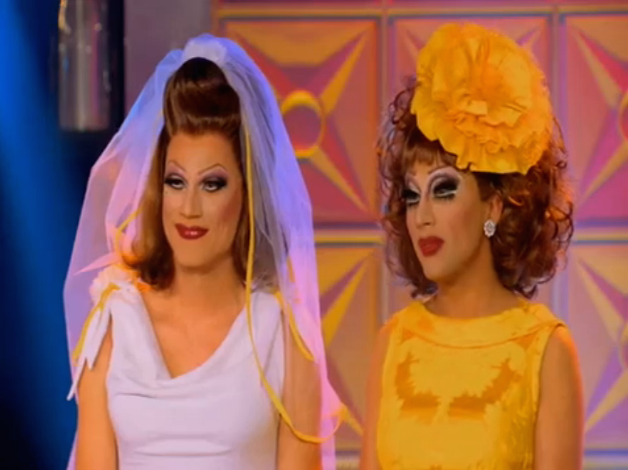 It’s the final six of Season 6, and someone got sick! So, here are the seis most outrageous things from last night’s episode.

6. Orange is the New Whack
Now that the whole she-mail debacle has been rectified, the most offensive thing on RPDR is its treatment of people of color … specifically those of the Oompa Loompa persuasion. From Santino Rice and Michelle Visage to Neil Patrick Harris and husband David Burtka, this week’s judging panel’s overuse of bronzer was so severe that authorities were almost called in to issue an Amber Alert. Tanning makeup kills, and somebody needs to save these chilrins!
5. Sew What?!
Adore Delano can’t stitch, cinch or do anyone else’s makeup if her life depended on it … and on this show, it does. But the gurl’s got personality, can perform and always manages to pull through in the end. Most importantly, she gives great interviews. So with all the fishy queens being taken out one by one, the time has come for Ms. Courtney to get her Act together. We’re 10 episodes in and still waitin’ for her to stop tawkin’ about how fabulous she is and finally brang it, henny.

4. I Don’t!
Was it me or was that entire marriage thing just strange? And I don’t mean because the ‘brides’ and ‘grooms’ were in drag. Maybe my heart is colder than Bianca Del Rio’s, but the whole half-sincere, half-joking vow exchanges were even more bizarre and confusing than a Lindsay Lohan miscarriage revelation. Speaking of … while I’m obviously all for gay-positive heterosexual couples, sometimes these heavy-handed ‘on a very special episode’-type segments (and the accompanying mood music) should just be aborted from the get-go.
3. Male Order Brides
Who doesn’t love a good makeover? While Bianca’s drag bride was the only decent doppleganger (Joy Behar, is that you?), the others provided some unfortunate wigged out looks. Joslyn’s reluctant protégé’s transformation did leave him looking like the female Gremlin … crossed with the blending skills of Season 5’s CoCo Montrese and the demure glamour of To Wong Foo’s Noxzema Jackson. Darienne Lake took out her rivalry on BenDeLaCreme by serving her guy some Michelle Visage realness, while Courtney and Dela successfully made their mother-of-the-brides look exactly alike and indecipherable from each other. And ay yay yay, Adore. Her bridezilla had the makings of a young Big Ang from Mob Wives … and needed to be taken out. Send these drag daughters to their rooms, stat!

2. What Does the Fox Say?
Joslyn Fox really is sickening. Sadly, it required a mop, bucket and two production assistants to prove it!  While I did grow to like J.Fo with her sweet demeanor, clueless giggle and out of drag Lori Petty chic, she just never really ramped it up and wowed us (ahem, Courtney Act). While her Vegas showgirl meets Long Island hoochie taste level was surely lacking, something should be said for the fact that she managed to always play nice and never really threw shade. A Drag Race first? But in the end, she lip synched and got out-Foxed by Adore’s stomping ratchet stage persona.
1. Bianca Del Rio
Congratulations, you are America’s Next Drag Superstar. Roll the credits.
Tweet
Follow me