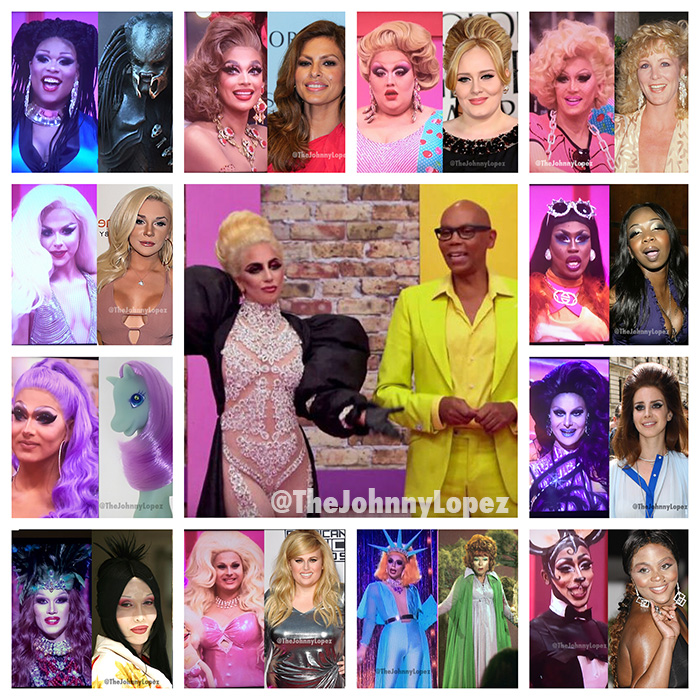 Just like gay neighborhoods and bars, RuPaul’s Drag Race has been gentrified, renovated and upgraded from Mondays on Logo to Fridays on Vh1 for it’s season 9 premiere (that’s assuming you count season 7 as legit & not just a Dallas/Bobby Ewing dream!). While it’s great to have the show embraced by a larger audience (and in HD), I can’t help but wonder if Logo is being slowly put out to pasture just like a 45-year-old on Grindr!  We can’t have nice things.

Well, the latest edition came decked out with all the Restoration Hardware bells & whistles including a “Fierce Fridays” Vh1 live show with Wendy Williams & Ross Mathews, its biggest celeb judge to date — Mother Monster herself Lady Gaga – and a strangely drag-free RuPaul episode. You betta werk them weaves in the next episodes, Mama Ru!

Three things I hated about this episode: Aja‘s grating Brooklyn millennial hipster overconfidence, most of the hometown outfits (Statue of Liberty is the new Madonna kimono-no-no!) & the proliferation of plastic surgery on these young kweens. Cue RiRi: Work. Work. Work. Work. Work. Work! And since Snatch Game won’t be for a while, I couldn’t help but think the gals were already channeling celebrity doppelgängers this week. See what you think. 1. Peppermint Is a Predator! She is gonna slay the competition! 3. Eureka – Um, HELLO! Give her all the trophies for those quick one-liners so far, stat! 4. Charlie Hides Is Going Through GROWING PAINS! At 52, Charlie is the chicest soccer mom on TV since Joanna Kerns. Let’s just hope the children ease up on the tired “old” jokes, because being ageist is the real drag! 5. Farrah Moan has a lot of blonde ambition. More Courtney Stodden than Aguilera if you ask me, but this Vegas body queen still ain’t the breast in show.

6. Alexis Michelle Ponies Up. She’s a Broadway queen, but right now Alexis’ voice isn’t the only thing that seems a little horse. 7. Shea Couleé Is From … NEW YORK? She’s really from Chicago, but … 8. Trinity Taylor — Young & Beautiful? Trin is not only serving Lana Del Rey, but also giving you Karen Black, Lainie Kazan and I swear some Gloria Allred. Google them, chilrins! 9. Kimora Black Is D.O.A  (Dead or Alive). Kimora your cocky bitterness spins me round like a tired record! RIP Pete Burns. 12. Aja Is Bewitching. I can already tell I’m gonna need Endora to whip up a spell to tolerate this child. 13. Sasha Velour Is a Mystery. She’s Moby meets Lori Petty meets Sinead with a Burger King crown. But what do you think? And who ya think the 14th queen is? Let me know below.

Oh My Gaga! If you haven’t already, watch UNTUCKED below.