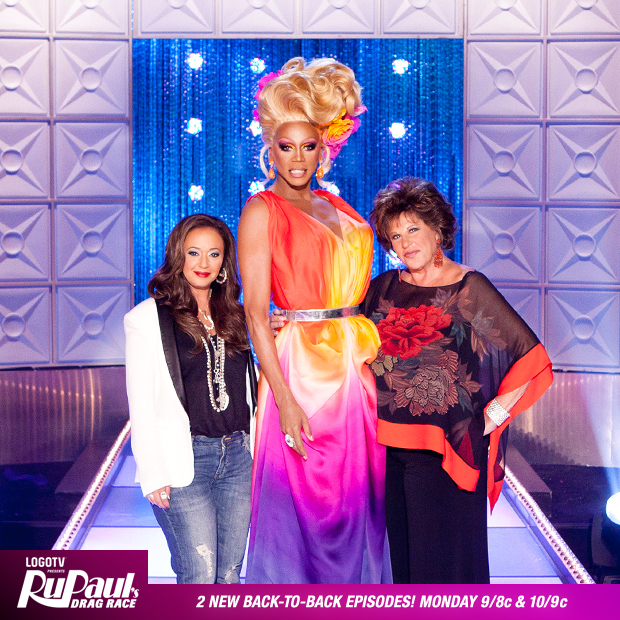 With two back-to-back episodes, this week had me questioning if RuPaul’s Drag Race was doing so badly that LOGO decided to burn off a week to save its losses. But then I realized, it’s LOGO, and what do they actually have to air in its place, Mr. Belvedere reruns? Anyway, thankfully we now know the super-sized double dose was because of this week’s non-elimination episode. So shanté you stay for an extra 60 minutes.

The Lake Haus
Speaking of super-sized, Darrienne continued with her tactic of picking a fight with Dela as a means of staying in the game. Herstorically, big gals have had about a size zero chance of winning, but creating faux dramz with the nicest person this season all but assures she makes it closer to the end. While she comes off sounding sad and bitter in all her rants, if she can keep the contrived turmoil up as well as she does her moobs, the bastard love child of Larry Bud Melman and Ursula from The Little Mermaid may just have a chance to represent the curvy girls in the final three.

Category is: Bianca Del Rio rRealness
And the winner is … Leah Remini. Was she a judge or a contestant? Leah may have narrowly escaped from Scientology with her life, but there is still one thing she wasn’t able to properly beat—her face. Someone please let her know makeup that harsh is only appropriate if you have a penis or after being driven home from a pre-Grammy party by Chris Brown.

With their natural White Chicks shtick, Laganja and Adore had this challenge in their giant leather Louis Vuitton bag. While Ganj’s bitchin’ and moanin’ about being overshadowed proved once again why she’s a total designer impostor, Adore’s one-liners, facial expressions and ‘dead dog’ runway realness further reiterated the fact that’s she’s the real deal. Party!

Oh Nomi Didn’t
Poor Courtney Act and Joslyn Fox. Despite being the two fishiest gals, there isn’t enough Glamazon Colorevolution in the world to enhance their mediocre Housewives act. While Court should gets bonus points for the Klaus Nomi (google alert for the kids!) runway ensemble, the four peeps who might have actually gotten the reference sadly don’t watch this show. In the end, it was Dela and Darienne battling it out to the “Point of No Return,” which proved to be a misnomer because no one sashayed away. Darrienne’s delusional hatred of Dela gets to live another day.

The Holy Trinity
It’s amazing how well Trinity K. Bonet did after a few encouraging words from Bianca … and the crafty handy work of the show’s producers. I understand the powers that be need to deliver a story arc, but this feels like the most blatant example of a contestant’s evolution being determined not by their talent but by that of the show’s editors (and the insertion of Ru’s cackling laugh throughout her stand-up). Sorry Ru, but I’m just gonna … say it, if you tell us Trinity has broken out of her shell and taken it to the next level (and we’re not just being shown her two best edits) then we’ll have to take your word for it, but it all sounds a bit like a Ru-se to me.

Comedy is a Challenge
There were two hysterical parts to the Drag Queens of Comedy—Bianca Del Rio’s set and the cast of elderly hobos, street urchins and assorted vagrants picked to be in the audience. As far as the gurls, Courtney was quite successful with her season-long mission to consistently underwhelm, while most shocking was the fact that normally on-point comedy queens Adore and Dela bombed. Joslyn finally stood out from the pack—by being in the bottom two—while Laganja imploded through her relentless Mad Libs use of ‘momma’ and ‘werk’ amid her latest disastrous routine. But thanks to their synchronized gymnastic abilities, this week’s lip synch proved to be a split decision. Unfortch Ganj played the Stupid Girl and broke the cardinal rule of drag and de-wigged herself (although it worked for Trinity, mmm hmmm). Sashay away, Momma!

Game Ovah
Please hand Bianca the crown already. While her mastery of wit and flawless execution of every challenge is sickening, homegirl even upped her glam game in that black and white princess runway getup. While B’s brand of ‘evil nice’ is sometimes mean, always funny and never wrong, her sage and endearing life coach skills with Trinity also prove there’s more than just a black heart underneath all that foundation and exaggerated eyeliner. And while she seems like the sure thing destined to take it all, don’t be fooled chilrins, as it’s still early enough in the season for producers to concoct an entirely new storyline … and winner. Exhibit A: Raven in season 2. Exhibit B: Chad Michaels in season 4. Just sayin’ …