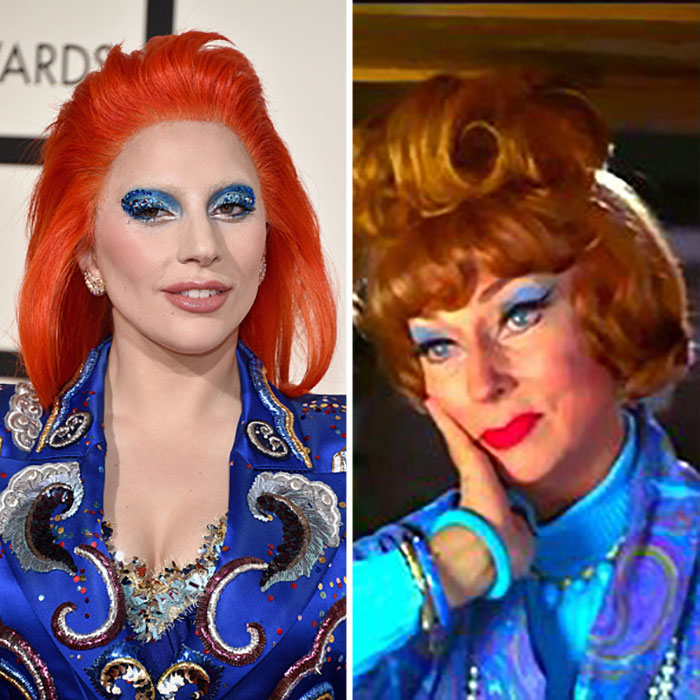 2. A bizarre terrorist cell made of Victoria Jackson/Jenna Elfman “Dharma” weave caliphates have infiltrated the country music industry. Save yourselves, Nashville! 3. Sorry Little Monsters, but Annie Lennox should have done the David Bowie tribute and saved us from this Elvis meets Bette Midler/C.C. Bloom “Oh Industry” outtake from Beaches. 4. Adele is human, but she’ll set fire to the rain … & anyone who fucks up her musical performance. As far as styling, the mother of the bride gowns really need to stop! 5. Best performance goes to Sam Hunt and his tight white t-shirt. The 31-year-old was head and shoulders (and ARMS!) above the rest. Yaaaaas, Hunty! 6. Wynonna Judd looks amazing. Oops! As penance for “All About the Bass,” Meghan Trainor has entered the Witness Protection Program. 7. The lead singer of Alabama Shakes is also the guy from Digital Underground. #HumptyDance 8. If he loses any more weight, Sam Smith is going to have to change his name to John Doe. 9. The only thing not moved by that Lionel Richie musical tribute was his face. 10. Robin Thicke & Pitbull – The sequel no one asked for:  A Night at the Roxbury 2: Electric Shit-aloo.

With so many lethargic numbers – save for Kendrick Lamar’s passionate performance & Lady Gaga‘s cuckoo bird SNL sketch – you wouldn’t have known last night’s Grammy Awards were actually live on the West Coast for the first time.

In between the red carpet and the latest round in the Taylor Swift -Kanye West publicity fight, here are a few other things that made me sit up and take notice. Enjoy! The Weeknd – His Ex-Machina humanoid girlfriend Bella Hadid had more life than his performance. Rihanna couldn’t make it so she sent her Snuggy-wrapped understudy Andra Day instead. Ellie Goulding – Did you know Jenner Lips™ are now available for natural blondes too? Stevie Wonder – Somehow he got roped into hosting The Hunger Games in the Capitol. Justin Bieber – Despite the douchey face pubes, the douchey animal print Jwoww outerwear, the douchey flexing poses and even his insistence of trying to make those douchey Michael Flatley Riverdance moves a thing, I’d still hit it. I fully realize I am part of the problem. Lady Gaga – She BEWITCHED us all. Johnny Depp, Joe Perry & Alice Cooper – Ever since prison, Teresa Giudice and the rest of the Real Housewives of New Jersey are looking rough. On a related note, remember to watch this week’s intense episode of The Walking Dead. Mark Ronson – This 40-year-old hipster can GET IT. All of it! Zendaya – No Patchouli oil and weed tonight, because her freshly blown out mullet is giving you former ’80s child star for the gawds! #WeaveAreTheyNow Tove Lo – More like Tove NO.  Septum piercings are perfect for when an exposed tat and a gown aren’t awful enough. James Bay – Apparently he was attending the Pennsylvania Dutch Grammys. Florence Welch – Sorry James Bay, but the Amish are so 2015. Everyone knows it’s all about being a Fundamentalist Cult Wife now! Even Lena Dunham is doing it, so it’s gotta be a thing. Beyonce –  Contrary to conservative outcries, she went all white. Britney Spears – No, she wasn’t anywhere near the Grammys, but ask yourself: Where were you nine years ago today? May she rest.