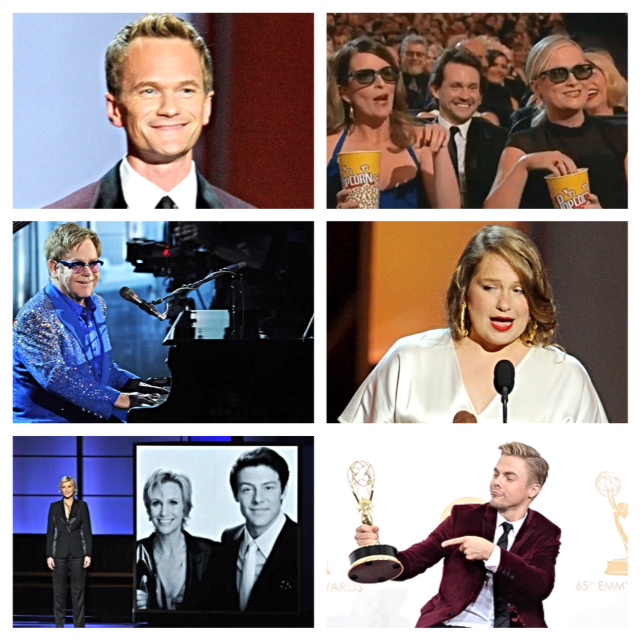 1. The Emmys are so obsessed with death that Ryan Murphy is giving them their own “American Horror Story” season next year.

2. “Modern Family,” Julia-Louis Dreyfus and Jim Parsons need to take themselves out of Emmy consideration. You should be allowed two wins for the same role and then g-bye!

4. Anna Faris’ new sitcom will never be as funny as her hair & dress last night. Yikes!

5. The Jon Hamm era is officially over, because it’s all about Bobby Cannavale now.

6. Either Kathy Bates or that woman from “The Weakest Link” will one day win an Emmy for the Showtime biopic “The Elton John Story.”

7. If anyone deserves to win an acting award for “Behind the Candelabra” it should really be the HBO wig department.

10. Sorry Ron Burgundy fans, but someone needs to make Will Ferrell stop. Like now.

With a tragic reminder of JFK’s assassination, 5 show-stopping death spotlights, the prerequisite In Memoriam tribute, a “Homeland” writer’s posthumous win, Elton John’s snore song about the late Liberace and a coma-inducing performance by Carrie Underwood, the only way the Emmys could have been any more morbid was if they had featured “Walking Dead” extras as seat fillers. If only!

Neil Patrick Harris — How does he do it? I mean, name another gay man that can dance, tell jokes, play straight when he has to and still look good in a suit? Um, on second thought …

Jon Hamm — He has the hottest beard … next to Kevin Spacey’s date of course. I kid. I kid. Kevin actually brought his longtime (business) partner, Dana Brunetti. Talk amongst yourselves.

Julia Louis Dreyfus — Kudos for having officially turned “Seinfeld” into just another credit on her resume.

Melissa Leo — She’s won an Oscar & an Emmy but somehow is still being styled by Jiminy Cricket.

Matt Damon — Catherine Zeta-Jones isn’t the only person not getting an award for f*cking Michael Douglas.

Michael Douglas — With gay innuendo, estranged spouses and incarcerated children, was that an acceptance speech or a Netflix series pitch meeting?

Connie Britton — In keeping with the “Behind the Candelabra” theme, she wore vintage Liberace velvet upholstery.

Mark Burnett — Praise the Lord he won for “The Voice” and not “The Bible.”

Diahann Carroll & Kerry Washington — Two gorgeous ladies serving a little TV history lesson for the children. While Diahann made waves with her groundbreaking sitcom “Julia,” it really is all about Dominique Deveraux and Olivia Pope. And the real scandal … Diahann is 78!!

Bobby Cannavale — Loved him since “Third Watch” but damn he’s really grown into a fine ass man. Besides dating the gorgeous Rose Byrne, another fun fact: He’s half Italian and Cuban… which makes total sense, I mean who wouldn’t want a slice of his platano.

Julianna Margulies & Dylan McDermott — They look great together & would be perfect in a romcom … if only they could play leads in theatrical movies.

Jeff Daniels — He better be careful, Walter White just put a hit out on him.

Claire Danes — She’ll always be Temple Grandin to me.

Derek Hough — Yes, we could all make jokes for days about the fact that Julianne Hough’s brother has an Emmy and insert celebrity name here does not. But the honest truth is that the choreography segment was the most entertaining portion of the telecast.  Break a leg, Mr. Hough.

Allison Janney — Looked amazing and not just amazing … for her. Just amazing. She should send Anna Faris a thank you card.

Ellen Burstyn — I liked “Political Animals” but everyone knows this award belonged to Sarah Paulson in “AHS:Asylum.”  Don’t f*ck with Lana Winters!

Breaking Bad — The Emmys finally got something right … and I don’t even watch the damn show.