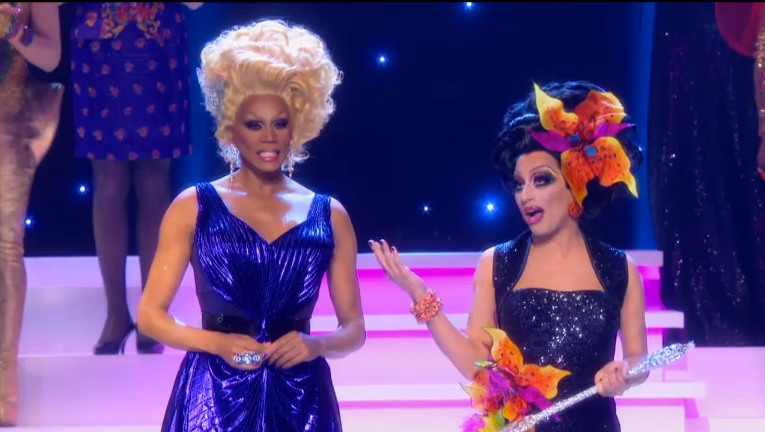 Move over Beyoncé, there’s a new Queen B in town, and her name is Bianca Del Rio.

Polar caps may be melting, airliners have gone missing and there’s a war in the House of Deréon, but my faith in humanity has been completely restored by RuPaul crowning Bianca Del Rio America’s Next Drag Superstar. Sometimes nice guys don’t finish last, even when they are reading you to filth!

While I do love Adore Delano with her drags to riches self-empowerment Cinderfella fairytale story, and no one can deny that Courtney Act sho iz pretty, neither could compare with the unstoppable force and unwavering brilliance of BDR’s rapid-fire wit, sewing skills and almost flawless execution of challenges.

Even when teamed against two Idol opponents with stellar voices, Bianca proved she didn’t need to know how to sing to hit a high note as she stole the show with her stand-out verse of the mutha fuckin’ Top Three number.

Adore became a star this season, while Courtney was so busy telling us how great she is that she actually forgot to show us. But Bianca didn’t have to learn her worth or endlessly talk up her game. A true champion never does.

In the end, B didn’t win the crown and Ru didn’t give it to her—she simply claimed what was rightfully hers from the start. And to do that definitely takes charisma, uniqueness, nerve and talent. 10. For RPDR it does get better! Viacom (Logo’s parent company) has finally shown the network’s lone hit some love with an over-the-top finale that had a real budget, featuring a proper stage, backup dancers and more wigs and sequined gowns in the audience than a Real Housewives casting call. Bravo!

9. There’s a reason certain kweens go home first. Kelly Mantle and Magnolia Crawford (or was it Peg Bundy and Patsy Stone?) had three months (actually longer since the show was taped last summer) to come up with an amazing one-liner to make themselves even remotely more memorable or endearing, and their vegan/nose jokes were all that they could come up with. Sashay away.

8. With her Grace Jones-meets-Dynasty’s Dominique Devereaux swagger, Vivacious needs to be runway walk mentor on every future season of RPDR. MUTHA needs to ‘give hips for your nerves’ to America on a weekly basis! I wanna learn whatever she’s teaching.

7. There’s something fishy about Gia Gunn, Laganja Estranja and Darienne Lake … and it’s that they all got nicer! Apparently reality TV does a c*nty attitude good. Sometimes the only way to really see who you are is to watch yourself on television. It’s the most likable and least irritating the three of them have ever been. I can’t believe I’m saying this, but shanté you stay!

6. Trinity K. Bonet is a white chick. No, seriously, she was serving Shawn and Marlon Wayans in White Chicks realness. All she needs is Iggy Azalea on board and they’ve got the sequel in the bag.

5. Televised marriages of all kind (gay, straight, Kardashian) must stop immediately. The sentiment may be there, but just like Britney’s wigs, they cheapen everything. And by the way, condragulations to Joslyn Fox’s fiancé, Andre—you just married your lover’s alter ego!

4. Courtney and Chaz Bono’s bizarre and semi-sexual relationship has the makings of a CBS sitcom. But forget Kevin James and Leah Remini, because they give new meaning to the King of Queens.

3. Adore and Laganja’s televised confrontation was painful to watch … and not just because of their raw, pancake-free mugs! While having it take place in what looked to be the basement of a Food 4 Less in Van Nuys didn’t help, bringing them in to watch their emotional fight in front of cameras came off a bit too gratuitous. But in the end it made you adore Adore even more as she refused to play up the dramz on-screen and actually took the conversation where it needed to be—in private. Now that’s keepin’ it real! 2. Michelle Visage is not having Laganja. No way. No how. That stare will cut you. She was giving facial expression for the GAWDS! The contestants may all be playing nice now, but MV don’t have to. All tea, all shade. Okkrrrr!

1. They really need to reveal the winner LIVE. Taping all three possible outcomes leaves the newly crowned drag superstar producing a reaction more typical of being told you just won a free foot long at Subway, which actually may have been Bebe Zahara Benet’s grand prize in Season 1! Minus her crocodile tears, Bianca couldn’t have seemed less enthused. Take your rhinestone scepter and smile, gurl! Also, I normally object to its stereotypical overuse in gay club scenes in film and TV shows, but if ever there was a time for dropping confetti from the ceiling, it’s after winning a $100K on a televised drag competition! Trust!